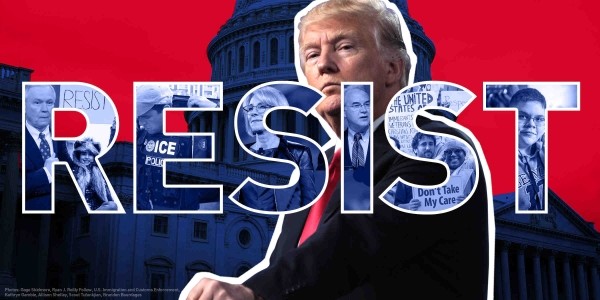 WASHINGTON —(ENEWSPF)–April 27, 2017.  The American Civil Liberties Union released today a report of the civil rights and civil liberties record in the first 100 days of the Trump administration. These include the unconstitutional Muslim ban, the failed Affordable Care Act repeal, and the repeated attacks on LGBT rights. The organization also published a day-by-day accounting of the administration’s “100 Days of Failure.”

Since the election of President Trump, the ACLU has more than quadrupled its membership and greatly expanded its followership on social media and email. The ACLU has taken legal action against Trump’s policies, including the lawsuits that blocked both iterations of the Muslim ban executive order. The organization also filed a Freedom of Information Act request seeking documents relating to Trump’s actual and potential conflicts of interest. In addition, the ACLU launched a new grassroots organizing platform, PeoplePower.org.

“In his first 100 days, Donald Trump has accomplished only one thing that is remarkable — he’s awoken American democracy like never before and reminded us all that it’s ‘We the People’ who truly govern. As Trump’s 100th day in office approaches, it is clear that resistance to his unconstitutional and un-American policies is everywhere. It is broad, deep, and intersectional, breaking barriers across class, gender, race, and even political and party lines, as some conservatives cast their opposition to Trump.

“The Resistance was present at our airports nationwide as Trump rolled out his Muslim ban. It was in town halls across the country where the people defeated Republicans’ disastrous attempt to repeal Obamacare. It was in front of the White House when Trump revoked guidance that protected transgender students’ right to use the bathroom that corresponds to their authentic selves. It was in congressional confirmation hearings as the people protested Trump’s cabinet picks, who had troubling records on civil rights and civil liberties. It was at the Women’s March where millions gathered across the U.S. in opposition of the newly inaugurated president.

“President Trump can indeed take credit in his first 100 days for fomenting a large-scale revolt against his unconstitutional policies in the streets, in the courts, and in legislatures across the U.S. America has not seen such broad-scale activism since the anti-Vietnam and civil rights demonstrations, and we have President Trump to thank for it. If sustained, this golden era of citizen activism may indeed be one of President Trump’s greatest legacies — albeit unwittingly.”

The ACLU is non-partisan organization. For 97 years, the ACLU has fought to defend the rights enshrined in our Constitution and has never opposed or supported any candidate for office — and it is not starting now. The organization has worked with and fought both Democrats and Republicans in the Oval Office, in Congress, and across the country.

The report on Trump’s first 100 days is available here: https://www.aclu.org/feature/100-days-resistance

The document detailing Trump’s “100 Days of Failure” is here: https://www.aclu.org/other/day-day-digest-president-trumps-100-days-failure