As Advocates Observe Equal Pay Day in the US, New Brief Examines International Approaches to the Gender Wage Gap 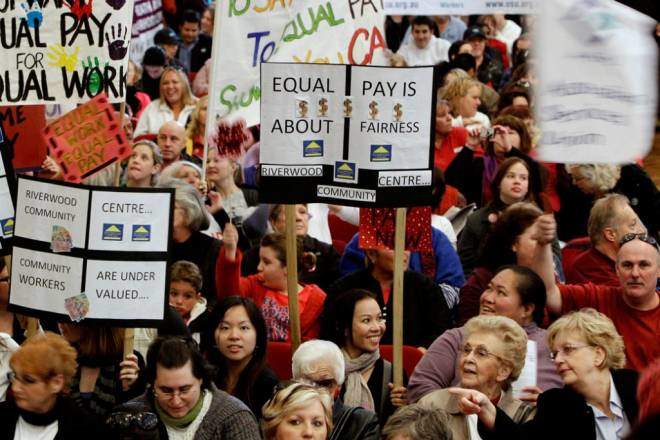 Protesters wave placards as they gather in Sydney during a nationwide protest calling for equal salaries for women, June 10, 2010. AP/Rick Rycroft

Washington, D.C. —(ENEWSPF)–April 4, 2017.  As equal pay advocates in the United States observe Equal Pay Day today, women continue to earn on average just 80 cents for every dollar earned by men. The wage gap is even worse for women of color: African American women and Hispanic women, for example, earn just 63 cents and 54 cents, respectively, for every dollar earned by white, non-Hispanic men.

As a new brief and interactive map by the Center for American Progress show, the wage gap is a problem that is common among many countries, including the United States. However, as other countries adopt and implement measures that are critical to closing the gender wage gap—such as work-family supports and wage discrimination protections—the United States is falling behind other nations in addressing the gender wage gap.

Women in industrialized nations face similar challenges in the workplace and at home that contribute to each country’s gender wage gap. Notoriously, however, the United States is the only industrialized nation without paid maternity leave and one of just a handful of developed nations without paid sick days. And although the United States was once a leader in anti-wage discrimination efforts, these issues have become so partisan that most recent robust federal policy proposals to address the wage gap have been stymied by congressional inaction.

“Numerous countries have adopted innovative policies in an effort to better support women in the workplace and to help close the gender wage gap,” said Kaitlin Holmes, a Research Assistant for the Women’s Initiative at CAP and co-author of the brief. “But in the United States, advancing policies to address wage discrimination and the gender wage gap has been all but impossible at the national level. Meanwhile, women—particularly women of color—continue to, by and large, earn less than their male colleagues, which can amount to hundreds of thousands of dollars lost over the course of a woman’s career.”

CAP’s brief features numerous examples of actions that countries have taken to help close the wage gap. Among these solutions, a few policy trends have emerged. These include, but are not limited to: protecting workers from retaliation for discussing wages; expanding employer pay data collection efforts; implementing equal pay for work of equal value guidelines; using gender-responsive budgeting; providing credits for caregivers, implementing work-life supports; and bolstering damages for victims of wage discrimination.

Read the brief: International Approaches to the Gender Wage Gap by Kaitlin Holmes and Danielle Corley

Read also: The Value of Equal Pay to the U.S. Economy by Kate Bahn