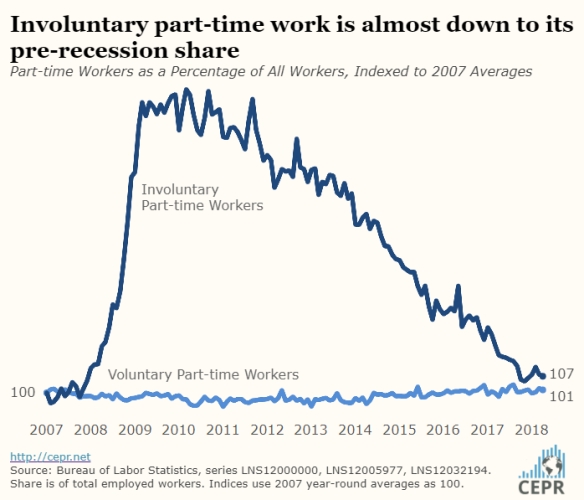 Wage growth actually appears to be decelerating, in spite of the low unemployment rate.

The Bureau of Labor Statistics (BLS) reported that the unemployment rate fell to 3.9 percent in April, the lowest rate since 2000. It has only been below this level for one month in the last 45 years. On the establishment side, the economy added 164,000 jobs. With upward revisions for the prior two months totaling 30,000, the average for the last three months stands at 208,000.

In spite of the drop in the unemployment rate, other aspects of the household survey were less encouraging. The decline was due to a reported drop in labor force participation, the second consecutive drop, not an increase in employment in the household survey. It is important to note that this follows a big jump in employment of 785,000 reported for February, so this more likely noise in the data rather than an actual weakening of the labor market. The employment rate for prime-age workers, ages 25 to 54, was unchanged at 79.2 percent, 1.1 percentage point below its prerecession peak.

There was also a drop of 0.4 percentage points in the share of unemployment attributable to voluntary quits. The 12.7 percent share is still the second highest level for this recovery, but well below the rates of the 13.7 percent average for 2000. This suggests that in spite of the low unemployment rate, workers are still not confident about their labor market prospects.

This is consistent with weak wage growth in the establishment survey. The average hourly wage increased by just 4 cents in April, bringing the year-over-year increase to 2.6 percent. The annualized rate of wage growth, comparing the last three months (February, March, and April) with the prior three months (November, December, January), is just 2.5 percent. If anything, wage growth is slowing modestly rather than accelerating.

The job gains in the establishment survey were broadly based. Professional and technical services added 25,700 jobs in April, followed by 24,400 in health care, and 24,000 in manufacturing. Employment in the sector is now 245,000 above its year-ago level. This job growth is striking since output growth has been modest. BLS reported yesterday that productivity in the manufacturing sector had risen just 0.8 percent over the last year. This is hard to reconcile with the idea of job-killing robots.

Construction added 17,000 jobs in April, a bit less than its average rate of 21,400 over the last year. Retail added 1,800 jobs, putting employment in the sector 71,800 above its year-ago level. Restaurants added just 14,800 jobs, compared to an average of 19,000 since April of 2017. This follows an increase of just 3,700 in March. This could indicate restaurants are having trouble attracting workers, although wages in the super sector have risen just 2.9 percent over the last year.

This is a difficult report to evaluate. The drop in the unemployment rate is less impressive, given that its cause is a drop in labor force participation. However, this is almost certainly as explained above. On the establishment side, the labor market continues to create jobs at a healthy pace, but the modest indications of accelerating wage growth in earlier reports have all disappeared. Even in the low-paying restaurant sector, employers don’t seem to feel a need to raise pay.

On the plus side, this should mean the Federal Reserve Board has little reason to raise interest rates. Even with an unemployment rate below 4.0 percent, there is no evidence of inflationary pressures.

Dean Baker is a Senior Economist at the Center for Economic and Policy Research (CEPR) in Washington, DC. He is the author of Getting Back to Full Employment: A Better Bargain for Working People among other books.

CEPR is an independent, nonpartisan think tank that was established to promote democratic debate on the most important economic and social issues that affect people’s lives.