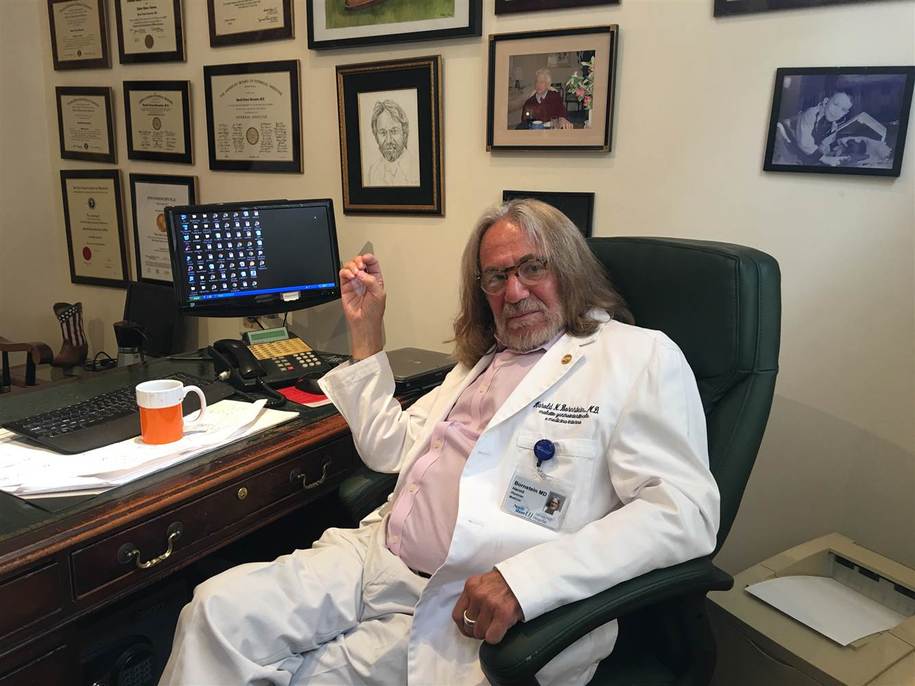 Want to change4 your story Dr?

At this point I’m thinking that the good Dr. Bornstein wishes that both he and his most excellent patient had just both kept their big, fat mouths shut. For a while there, it looked like they had gotten lucky there, but no more.

You all remember the famous “physical letter”. It came out in December, and was instantly the focus of incredulity due to it’s rather offbeat superlatives, as well as its typo errors and somewhat discordant phrases. But Trump being Trump, new outrages pushed the story out of mind after a fairly short cycle life. It was over with. But then Trump, with the help of his erstwhile lackey Sean Hannity had to go and start casting aspersions on Hillary Clinton’s health, which brought his own rather dubious letter back to the fore. Then NBC news caught up with Dr. Bornstein in his office for a little chat, one of the strangest professional interviews ever caught on camera.

Now, actual doctors are starting to weigh in, evaluating the letter. In a new article on The Atlantic a doctor dissects the letter, calling to account the anomalies in its writing in medical terms. Plain, pure and simple, this is not how doctors write.

First of all, the superlatives are extremely unusual. Doctors tend to eschew superlatives, preferring phrases like “reassuring” or “encouraging” as their quantitative narrative. If the word “excellent” were ever chosen, it would never be led in with the word “astonishingly”.

There is a reason for this. Clarity and interpretation. Multiple people can be reading charts, letters and assessments, there can be no confusion of intent. The Dr. related an anecdote from his internship days that makes the point perfectly;

During my medical internship, I had a patient who was taking blood thinners, and she came to the hospital after she had accidentally taken too much. Our plan was to keep a close eye on her until the medication wore off. I wrote in the patient’s chart, in one hurried stroke, that the action plan was to discharge her from the hospital as soon as her blood coagulation rates were “cool.”

I received an irate page from my attending physician as soon as he read that. “WHAT DOES IT MEAN FOR A TEST TO BE COOL?”

Point taken, I was supposed to write “when the INR [international normalized ratio] is between 2 and 3.” This way there would be no ambiguity for anyone who reads that chart. He knew what I meant, but his point was that every nurse and social worker and phlebotomist (and lawyer) who picked up that chart needed to be on the same page. So always write this way.

“Always write this way”, the money shot. If you fly a plane, you fly it in one standardized way, so your co-pilot has no question as to what you’re doing. If you’re an accountant, you use a standardized format, so another accountant knows exactly what you’re saying. If you’re a lawyer, you confuse the shit out of everybody at least twice per page. As Geico says, “It’s what you do”. So why was this letter so radically different?

The author really hammers in on the peculiar circumstances surrounding the creation of the letter in the first place. Trump tweeted on 12/03 that his doctor would be releasing a letter “within two weeks” and promising perfection. The letter was written the next day, and Dr. Bornstein admits that he wrote it in five minutes, while the car was waiting for it, and didn’t even proofread it. Why the insane rush? In other words, he was kowtowed by Trump.

I agree with the author, this is complete and utter bullshit. Patients don’t tell their doctors anything other than their symptoms and issues, the doctor tells them what’s going on. I may discuss treatment options or medications with my doctor, but I don’t tell her when she can write the prescription, or when and how often I’ll take the things. That would be like a private giving his Sargeant an order. Doctors are like military officers, they don’t take orders from the underlings, they give them. If Dr. Bornstein actually caved in to Trump and wrote the letter under pressure, why should we believe a word in it? And if Bornstein didn’t write the letter, who the hell did?

The e-mail address for Dr. Bornstein on the letter is also suspect. It is a “gmail” address, therefore it is not a secure platform. If a patient is e-mailing his or her doctor, why else would they be doing it except to discuss confidential medical information. Security is not only advised, it is mandated by the HIPAA law. Just how lax are Dr. Bornstein’s business practices?

The author also quotes from another article in the Huffington Post by another physician that caught something even more alarming;

So, in closing, what the hell is going on with this letter? If you need a legal opinion you go to a lawyer. If you meed a medical diagnosis you go to a doctor. And the diagnosis that these doctors are giving to Dr. Bornsteins letter is that it is on life support. If the media picks up on this and runs with it, both Dr. Bornstein and Mein Trumpf may find themselves under more scrutiny than they bargained for.

Thanks as always for reading!