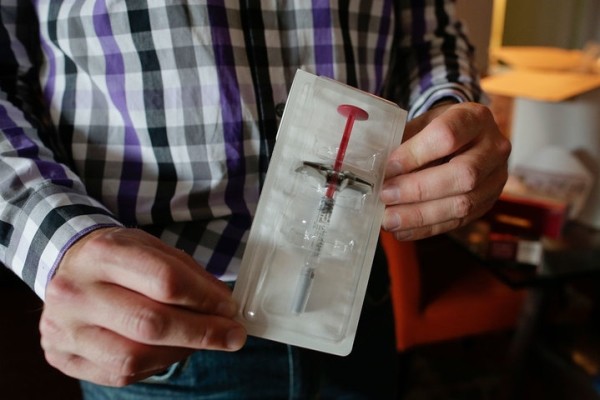 Brian Greenberg, who suffers from Crohn’s disease, holds up a syringe preloaded with his prescription medication that was delivered to his home in Stamford, Connecticut, July 6, 2016. AP/Julie Jacobson

Washington, D.C. — (ENEWSPF)–April 21, 2017. A new column from the Center for American Progress finds that under President Donald Trump and House Speaker Paul Ryan’s (R-WI) latest proposal to repeal the Affordable Care Act, or ACA, millions of people with pre-existing conditions could see their premiums soar, costing them thousands of dollars more for coverage each year.  After failing to force through the repeal bill in March, the White House and Congressional Republicans are trying to rally support in their caucus by letting insurers charge much higher rates to people with pre-existing conditions.

Proponents of this new plan have argued that the premium increases will be offset through a new so-called invisible risk sharing program. The risk pool would provide $15 billion over nine years, but with Trump and Congress proposing to cut hundreds of billions of dollars of ACA subsidies that help people afford insurance, this new fund would do next to nothing to mitigate the damage from the bill.

“The proposed invisible risk pool would shave only a tiny sliver off the increased costs that consumers would face if pre-existing condition protections were stripped away, which could run in the tens of thousands of dollars for the sickest consumers,” said Emily Gee, Health Economist at CAP.

CAP’s report estimates the premium surcharges for people with various medical conditions if Trump and Congress were to repeal the pre-existing condition protections in the ACA. People with asthma could be charged 106 percent above more standard rates, while those with metastatic cancer would see a crushing 3,500 percent increase in their premiums. Even accounting for the invisible risk pool, that would mean astronomically high premium increases, including $4,270 for asthma, $17,060 for pregnancy, $26,180 for rheumatoid arthritis, and $140,510 for metastatic cancer.

“This new plan is even more harmful to working families than the last one. It would strip away important protections for those with pre-existing conditions, sending their premiums skyrocketing. Rather than continue to make a bad bill worse, Trump and House Republicans should stop debating repeal and start considering commonsense ways to build on the ACA’s progress in making affordable health care coverage available to all Americans,” said Sam Berger, Senior Policy Adviser at CAP.