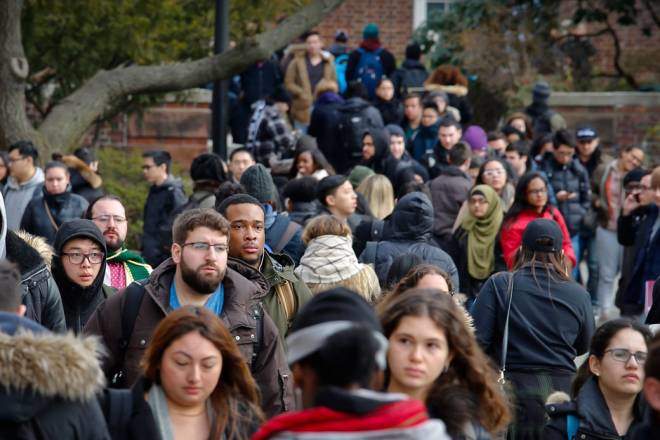 Students walk between classes on a campus in New York on February 1, 2017. AP/Bebeto Matthews

Washington, D.C. —(ENEWSPF)–March 31, 2017.  A new first-of-its-kind analysis from the Center for American Progress finds that the nation’s 12 major college accrediting agencies—gatekeepers to billions of dollars in federal student aid—do not have the resources or staffing to adequately protect students and taxpayers from poor-quality institutions.

Accreditors have come under fire recently after failed institutions, such as Corinthian Colleges, raked in billions at taxpayer and student expense.

“Failing to invest enough upfront in oversight means that taxpayers end up paying more on the back end to fix problems caused by low-quality colleges. We get what we pay for so if we want accrediting agencies to act as fair arbiters of quality and meaningful safeguards of student aid, we must ensure they have adequate resources to do so,” said Antoinette Flores, Senior Policy Analyst on the Postsecondary Education Policy team at CAP.

The report, which analyzes accreditors’ tax filings and membership dues and fee structures, recommends a number of fixes to help improve overall resources and targeting of resources toward colleges that are most in need of improvement.

The analysis has four main findings:

Click here to read “Getting What We Pay for on Quality Assurance” by Antoinette Flores.

Previous articlePeople of Faith Are Increasingly Supportive of Transgender Justice
Next articleAnnual Report to the Nation: Cancer Death Rates Continue to Decline