Nov. 4 National Protests Are Under Attack by the Alt-Right, Lies, Threats of Violence, Denial of Permits

November 4th National Protest Movement to Demand: This Nightmare Must End: The Trump/Pence Regime Must Go!

Alt-Right, conservative, white supremacist, and outright fascist organizations have threatened violence and even issued death threats against nationwide nonviolent protests organized by RefuseFascism.org scheduled for November 4. Spreading disinformation and outright fabrication, these forces spearheaded by Alex Jones and InfoWars.org, are endangering the safety of thousands of people. At the same time, police in NYC and San Francisco have denied permits based on technicalities for the RefuseFascism.org non-violent rallies and marches.

These denials, together with the right wing threats on the Nov 4 protests, endanger the safety and even the lives of the protesters, with their right to dissent curtailed if not outright suppressed. RefuseFascism.org spokesperson, Sunsara Taylor, said today: “The protests on November 4 will go forward. Our aim is just and in the interests of the people of the world and we will not be deterred. We will not let the threats of white supremacists and fascists prevent the people from standing up against the cruel and hateful agenda of the Trump/Pence Regime.”

RefuseFascism.org is a national movement made up of people from diverse perspectives united around the recognition that the Trump/Pence regime poses a catastrophic danger to humanity and the planet. Refuse Fascism is organizing protests in cities and towns across the country on NOVEMBER 4 that BEGIN a movement of continuing protests until the demand: “This Nightmare Must End: the Trump/Pence Regime Must Go!” is met. This moment, when even the conservative Republican Chairman of the Senate Committee on Foreign Relations says that the Trump has put the country on the “path to World War 3,” calls for unprecedented mass action.

RefuseFascism.org is organizing thousands to begin nonviolent political protests on November 4 that inspire and draw forward a movement of protests that continues and grows over the coming days, weeks and even months if necessary – growing from thousands to millions. Organizers have invoked the protests that rocked Seoul, South Korea last year that resulted in the impeachment of the South Korean President in March. Refuse Fascism’s Call for Nov 4 states:

“Our determination to persist and not back down will compel the whole world to take note. Every force and faction in the power structure would be forced to respond to our demand. The cracks and divisions among the powers already evident today will sharpen and widen. As we draw more and more people forward to stand up, all of this, could lead to a situation where this illegitimate regime is removed from power.”

The lunatic right wing operative, Alex Jones, who Donald Trump has appeared with, and has supported in statements, has been the major amplifier of the dangerous attacks on Refuse Fascism. On September 29, 2017, Jones published on his website, InfoWars, lies that set off a chain reaction of disinformation that has spread throughout the alt-right internet world, resulting in:

At the same time, Facebook has suspended various administrators of RefuseFascism.org’s accounts, apparently because they have posted content that has been systematically “flagged” and reported by fascist trolls. This content for which Facebook has suspended accounts includes video of legitimate political protest that was covered in many major media outlets, footage of illegitimate police violence that was being exposed and protested, and poetry. Meanwhile, fascists who are issuing death threats against RefuseFascism continue to post on Facebook at will.

All of this is based on and further spreads disinformation and lies which undermine the legitimate Nov 4 protest and which could cause protesters physical harm.

Yet, very little word about this movement in the mainstream media. This use of violence and threats of violence to suppress speech by thugs and the state are a hallmark of fascism. It is imperative that these lies and threats by these fascist forces be exposed throughout the media and that the actual aim and political objective of November 4 be accurately reported by media.

The denial of permits by New York and San Francisco, despite declared opposition to Trump’s agenda by the mayors and governments of these cities, not only interferes with the right of the people to protest, it also gives credence to the lies and scare-tactics of the Alt-Right. These permit denials potentially frighten away supporters of the November 4 demonstrations and objectively reinforce the fascistic suppression of speech by the Trump/Pence Regime and the fascist gangs it has unleashed. It is dangerous, and must not be allowed to continue, that fascists are able to spread lies and threats of violence with a free hand, while the principled organizers of November 4, who are organizing people to stand against fascism, are being targeted and then suppressed by silence in the media.

Refuse Fascism and every progressive person, every person and organization who cherishes justice, every journalist and media outlet who values that the truth be told, needs to expose the lies, denounce and stand against the threats and demand the NY and San Francisco grant the permit applications for Nov 4.

RefuseFascism.org Statement on the Lies and Distortions by Fascist Web Sites & Trolls

“There are a lot of hunters with precise aim in those Republican strongholds that will protect their property. These hunters can hit their target with one bullet, they don’t have to shoot 25 times to hit one person.”

OPEN LETTER TO ANTIFA:WARNING!!!!!
Dear Antifa kids,
I’ve been hearing through social media that you’ve got this big attack planned for 4 Nov. 2017. I heard that you’re stocking up on weapons and ammunition for this attack. I heard that you’re planning on initially attacking civil servants and first responders (i.e. police officers, EMTs, and fire fighters). And then you plan on attacking government buildings and personnel in order to disrupt society.
Okay, pay attention, because this REALLY needs to sink in;
IF you plan on doing this, you will not only be going up against fire fighters, EMTs, and armed police officers, but you’ll also be going up against bikers, hunters, CCW carriers, other citizens, 87 million militia and last but not least….members of the United States military. Because all of these aforementioned groups of individuals will NOT stand by and let you try this. So, think before you act because you’re biting off WAY more than you can chew. I’m sure if you try this, there will be a lot of dead kids that thought they were rebels until it was time to do rebel stuff. And no amount of training that you could do in such a short time, will prepare you for the Hell you’ll face if you try this.

Have a nice day,
A Patriotic American Citizen 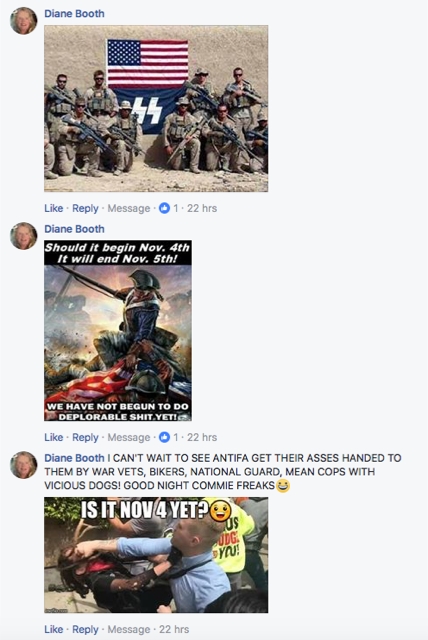