People of Faith Are Increasingly Supportive of Transgender Justice 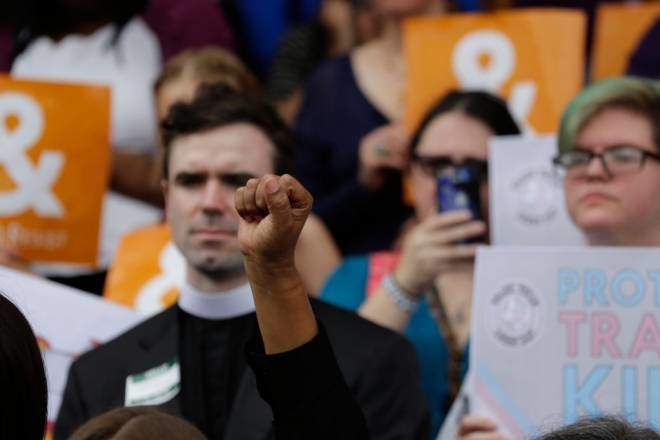 Members and allies of the transgender community rally on the steps of the Texas Capitol, on March 6, 2017. AP/Eric Gay

Washington, D.C. —(ENEWSPF)–March 31, 2017.   Friday, March 31, marks the Transgender Day of Visibility, an annual celebration of the accomplishments and victories of transgender and gender-nonconforming people. Despite incremental progress for transgender people over the past few years, it is critical to recognize the work that remains to ensure transgender people’s rights and inclusion in the United States. Furthermore, as a new column by the Center for American Progress, or CAP, demonstrates, the Transgender Day of Visibility also provides an opportunity for communities of faith to contemplate how they are called to contribute to transgender justice.

Transgender people in the United States face many barriers to health, safety, and inclusion in public life—barriers that have been made more difficult under the Trump administration and because of opponents at all levels of government. Over the past year, an onslaught of anti-LGBT legislation has been introduced—and, in some cases, passed—in state legislatures. Many of these bills specifically target transgender and gender-nonconforming people, including so-called bathroom bills that bar transgender people from using restrooms in accordance with their gender identity.

However, despite the swell of anti-LGBT legislation being introduced by conservative lawmakers, communities of faith are broadly supportive of the LGBT community, including transgender people. In fact, people of faith who do not support transgender rights and inclusion are a vocal minority.

“Every major religious tradition has at its core a call to protect vulnerable people,” said Claire Markham, Associate Director for the Faith and Progressive Policy Initiative at CAP. “Transgender people in the United States face higher rates of discrimination, unemployment, harassment, and violence than the general population. People of faith who answer their tradition’s call to protect the vulnerable in society are increasingly working for transgender justice within faith communities and in public life.”

As a corresponding infographic also released by CAP demonstrates, majorities of all major religious groups in the United States are in favor of nondiscrimination protections for LGBT people. Even when it comes to access to public restrooms, majorities of many faith groups believe that transgender people should be allowed to use public restrooms that correspond to their gender identity.

Read the column: People of Faith Are Increasingly Vocal Supporters of Transgender Justice by Claire Markham and Tracy Wolf