Women face more hard-to-avoid risks than men, especially from caregiving, that can lower their savings and leave them economically vulnerable. 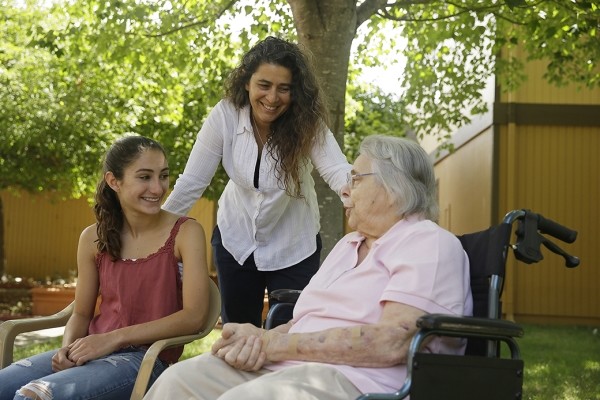 A daughter, center, visits with her mother, right, at an assisted living facility as her own daughter, left, looks on in Santa Rosa, California, July 2015. AP/Eric Risberg

Washington, D.C. —(ENEWSPF)-April 27, 2017.  A new report released by the Center for American Progress finds that women face more hard-to-avoid economic risks than men and that women are more likely than men to face several economic risks at once. The findings, also summarized in a new issue brief by CAP, show that single women face some of the most concentrated economic risks and have less protection against such risks.

Economic risk broadly refers to chance events that could lead to a decline in economic well-being. This decline can be measured in a loss of income, a drop in savings, and an increase in debt. Much in the same way a person’s exposure to extreme weather events increases their risk of suffering the events’ effects, the effect of economic risk is experienced as long as a person is exposed to such risks.

While everyone faces some degree of economic risk—through, for example, their job or family—women are disproportionately exposed to these risks. Worse, narrow definitions of risk exposure that exclude issues such as lower pay, unemployment, and unexpected unpaid leave from work for caretaking—issues that disproportionately affect women—understate women’s total risk exposure.

By including a broad conception of economic risks in its analysis, CAP’s report found that:

“Basically, women are doubly disadvantaged,” said Christian E. Weller, a Senior Fellow at CAP and co-author of the report and issue brief. “Women face more structural barriers than men during their careers—for instance, from higher unemployment, lower pay, and more caregiving responsibilities—and as a result, face a less secure future.”

“Single women in particular face some of the worst economic risks, and our system of protections against risk leaves them out in the cold,” said Kate Bahn, an Economist at CAP and co-author of the issue brief. “This is particularly troubling given that single women represent more than half of women in our economy.”