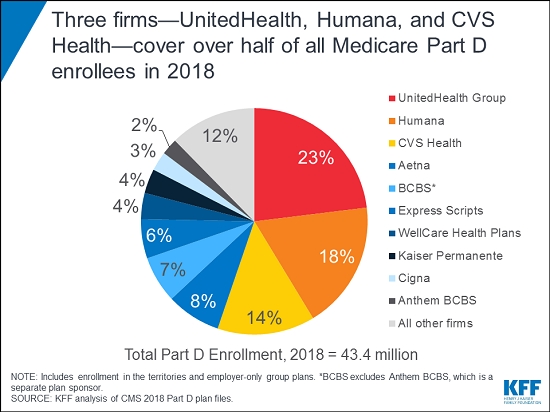 In 2018, three Medicare Part D plan sponsors—UnitedHealth, Humana, and CVS Health—account for more than half of the program’s 43 million Part D enrollees (55 percent) and two-thirds of all stand-alone drug plan enrollees, indicating a marketplace that is dominated by a handful of major insurers, according to a new Kaiser Family Foundation analysis of Part D enrollment, premiums and cost-sharing data.

The proposed mergers of CVS Health and Aetna, and Cigna and Express Scripts would result in further consolidation of the Part D marketplace. If these mergers go through, four firms—the two merged firms plus UnitedHealth and Humana—would cover 71 percent of all Part D enrollees and 86 percent of stand-alone drug plan enrollees, based on 2018 enrollment.

In addition to examining the latest trends in Part D enrollment, the analysis, Medicare Part D in 2018: The Latest on Enrollment, Premiums, and Cost Sharing, finds that premiums for stand-alone prescription drug plans have risen modestly in recent years, with a 2 percent increase in 2018, to $41 per month. At the same time, premiums vary widely among the most popular PDPs, ranging from $20 per month for Humana Walmart Rx to $84 per month for AARP Medicare Rx Preferred.

With consumers increasingly concerned about the cost of medication, the analysis finds that most Part D enrollees face modest cost-sharing amounts for generic drugs but can face much higher cost sharing for brands and non-preferred drugs. For PDP enrollees, for example, median cost sharing ranges from $1 for preferred generics to $37 for preferred brands, and a 40 percent coinsurance rate for non-preferred drugs. For specialty drugs, defined as those that cost at least $670 per month, more than 4 in 10 Part D enrollees are in plans charging the maximum 33 percent coinsurance for these drugs.