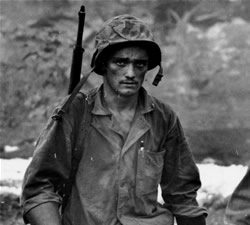 THE WAR intertwines eyewitness accounts of the harrowing realities of life on the front lines with reminiscences of Americans who never left their home towns and tried to carry on. (Photo: PBS.org)

Park Forest, IL—(ENEWSPF)— A new World War II documentary, THE WAR, premiers on PBS September 23. A seven-part series directed and produced by Ken Burns and Lynn Novick, THE WAR tells the story of the Second World War through the personal accounts of a handful of men and women from four American towns.

Plans call for THE WAR to air over two weeks beginning Sunday, September 23, 2007, (four nights the first week and then three nights the second week), 8:00-10:00 p.m. ET (8:00-10:30 p.m. ET on three nights) on PBS. In addition to the national broadcast on PBS, THE WAR will air simultaneously on PBS High Definition Channel with surround sound. PBS will repeat each episode the night it airs, stage marathon viewings on the weekends and launch the film as a weekly series after its first two-week run. The series also will be rebroadcast on PBS’ World Channel following the original broadcast. A Web page dedicated to THE WAR has been launched at pbs.org/thewar.

Six years in the making, this epic 15-hour film, reminiscent in scope and power of Burns’s landmark series The Civil War, focuses on the stories of citizens from four geographically distributed American towns — Waterbury, Connecticut; Mobile, Alabama; Sacramento, California; and the tiny farming town of Luverne, Minnesota. These four communities stand in for — and could represent — any town in the United States that went through the war’s four devastating years. Individuals from each community take the viewer through their own personal and quite often harrowing journeys into war, painting vivid portraits of how the war dramatically altered their lives and those of their neighbors, as well as the country they helped to save for generations to come.

“The Second World War was so massive, catastrophic and complex, it is almost beyond the mind’s and the heart’s capacity to process everything that happened and, more important, what it meant on a human level,” said Burns.

By focusing on the personal stories of ordinary Americans who had extraordinary experiences, the film tries to bring one of the biggest events in the history of the world down to a very intimate scale. And in the end, we all begin to see that there are no “ordinary lives.