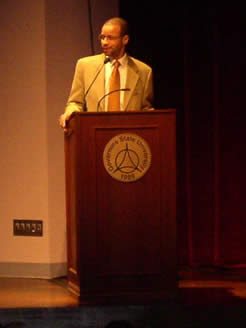 Rev. Dr. Frank A. Thomas was the guest speaker at the 8th annual Dr. Martin Luther King, Jr. celebration on Monday, January 15 at Governors State University.  Dr. Thomas, an ordained minister, currently serves as the Senior Pastor of Mississippi Boulevard Church in Memphis, Tennessee.  He spoke to a packed auditorium.

The following are excerpts from his talk.

“But when he died, he wasn’t a very popular King.  They called him “Martin Loser King.”  And they were saying he wasn’t relevant.

"I want to ask you this question this morning, can rich people be saved?

"Who then can be saved?  Can rich folks be saved?  I know that you’re probably thinking about whether Oprah, or whether Donald Trump, or whether Bill Gates can be saved.  The average American does not characterize themselves as rich.  But under close inspection, we find another reality.  We discover that we live in consumerist culture.

"In Economics, consumerism can also refer to economic policies that place an emphasis on consumption, and in an abstract sense, that the free choice of consumers should dictate the economic structure of society.

"So, after 9-11-01, our president stands up to us and tells us to go shopping.  Because in a free market economy, it is the interest of consumers that move.  And we equate personal happiness with the purchase and consumption of things.

"Consumerism is the glorification of individual choice.  In consumerist culture you define your identity according to which choices you make, and what you ally your self with in the culture.

"For most people, this takes the ritual of purchasing.  By buying things, you ritually surround yourself with tangible objects which symbolize the cultural corporate ideology that you adhere to. 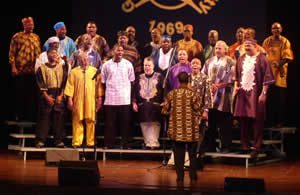 "I stood up in front of the congregation after [Hurricane] Katrina and asked, where was Versace?  Where was American Express?  I kept wondering, why do we buy these things?

"Americans love rags to riches stories.  It is one of the stories that gives our culture meaning.  We love to propagate the myth that in America, anyone can go from nothing to something.  We call it, ‘The American Dream.’

"The American Dream can also be used to cover racism and economic injustice.  From this perspective, consumerist culture says, ‘If Oprah can take her self from the back woods of Mississippi with poverty and abuse, and raise herself up to be one of the most powerful women in the world, stop whining about racism, and make yourself into another Oprah.  Stop whining about economic injustice and raise yourself up by your own boot straps.’

"And you can go from rags to riches in this country, but it is over-glorified, over exalted, and it is the salvation narrative of our culture.  Christians get saved by following Jesus.  You get saved in this consumerist culture by spending money, or by owning things that make it appear like you got money.

"What we have is debt.

"Which means that Americans are addicted to oil.  It’s our addiction that gets us into the sands in Iraq.  It’s addiction to oil that’s getting our soldiers killed.

“I got in the shower and took an American shower.  The kind where the mirror fogs up.  The host knocked on the door and said, ‘We don’t use water like that in Africa!  Water is more precious!’

"The average American generates 52 tons of garbage by the age 75."

After quoting some figures regarding how much the United States government spends in various areas, he continued, "We got Lance Armstrong on TV begging for more money for cancer, while all the money’s going to bombs and bullets.

"This is what Martin Luther King meant when he said that the great axis of evil was racism, militarism, and excessive materialism.  He said that capitalism as a system was fundamentally and structurally flawed and it would never take care of the poor.  He said, and they don’t play this on television, he said that because we have an interest around the world, we have to send our military to protect our economic interests.  And then we justify that with the kind of racism where the rest of the world is second class.  We even call it the second world, the third world.

"Like it or not, when we compare ourselves with the rest of the world, most Americans are rich.  And how are we going to be saved?

"I want to call you to sacrifice.  We don’t hear that word around America much.  Our president can’t even call us to sacrifice for the war.  This is the first war in the history of our nation where we’re fighting, and we’re not asked to sacrifice.  We’re told to go shopping, while troops and their families bear the brunt.  While I’m not asked to do anything, to give up anything.

"Can you live on 80% of what you make?  I'm talking to you about breaking out of the cycle of consumerist culture.  I'm telling you this:  You cannot get more until you're better stewards of what you have now.  You will not be free until you manage your debt and your lifestyle in a very different way.