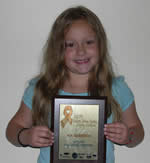 Mia Garrison displays the award she won for her drawing. (PHOTO SUPPLIED)

Winning first place in the kindergarten through first grade category was Park Forest’s Mia Garrison. IDOT’s goal of encouraging students and their parents or caregivers to become aware of the importance of driving safely in work zones has special meaning to young Mia as her father is a truck driver.

While Mia enjoys art, she plans on becoming a doctor in the future. But her current goal is to enjoy summer activities in Park Forest with her parents and 3-year-old brother, Carter. Mia will be a second grader at Algonquin Primary Center in the fall.

The drawings of the 12 state winners will appear in the 2010 Illinois Work Zone Safety Calendar which will be distributed at IDOT events across Illinois.

Mia’s award wining drawing will now be entered in a national calendar contest. Winners of the national event will be announced later this year. 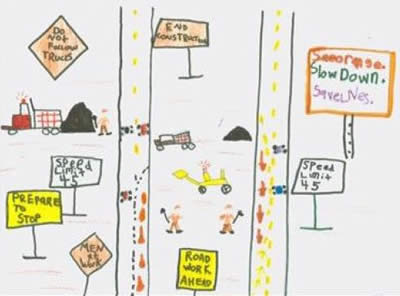