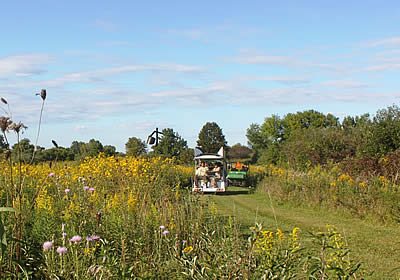 University Park, IL-(ENEWSPF)- Governors State University is celebrating the 30th anniversary of Martin Puryear’s installation of “Bodark Arc,” at the Nathan Manilow Sculpture Park (NMSP). BMO Harris Bank is pleased to present this annual benefit fundraiser, Carts & Cocktails, offering guests an engaging afternoon featuring a conversation with Michael Darling, James Alsdorf Curator at the Museum of Contemporary Art in Chicago, cocktails, and a tour of the park in golf carts. Carts & Cocktails will be held on Saturday, September 8, from 3 to 6 p.m.

Martin Puryear, one of the world’s elite African American sculptors, lived in Chicago when his work gained international recognition. In February, 2012, President Barack Obama presented Puryear with the National Medal of Arts, the highest award given to artists and arts patrons by the United States Government.

“Carts & Cocktails provides the chance for folks who’ve been curious about the Manilow Park to visit informally with others who are committed to its growth, sample some fabulous food, and tour our prairie and selected works in a chauffeured cart,” said Geoffrey Bates, NMSP executive director and curator. “The landscape promises to be ablaze with autumn color and when the late afternoon sun rakes across the hills it delivers an incomparable experience.”

Following cocktails and hors d’oeuvres in a lakeside tent, guests at the event will take a motorized tour of the sculpture park, where a breathtaking prairie landscape is home to 27 monumental works by some of the world’s greatest artists. Stops are planned at “Bodark Arc” and two other sculptures. After the tour, Carts & Cocktails concludes with desserts in the tent.

Michael Darling is guest speaker at the event. “We’re very excited that Michael agreed to say a few words about Martin Puryear and his significant contributions to late 20th Century American sculpture.” Bates said, “Michael’s recent MCA exhibitions highlighting sculpture have been highly regarded, both in the Chicago area and around the country.”

The Nathan Manilow Sculpture Park is located at Governors State University’s main campus in University Park. The park is free of charge and open from dawn to dusk 365 days a year.