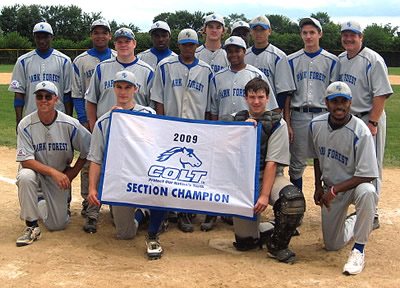 Park Forest, IL–(ENEWSPF)– For only the second time in PF Baseball history, the Colt team has won the sectional title in the Pony National Tournament. On Sunday, July 19th, Rich East was the site of the championship game in the sectional tournament of the Pony National Tournament, which was hosted by PF Baseball. The Colt team is made up of 15 and 16 year olds and this year’s team is managed by Steve Gifford and coached by Dennis Pieper and Reggie Coleman. All three gentlemen are also on the PF Baseball Board of Directors.

The PF team began their march on Thursday, July 16th, when they played against St. Joe (Joliet Area) and won 4-2. The pitchers of record were Mike Milkovic and Josh Pieper, with Milkovic picking up the win. The offensive power was provided by Phil Werner, Josh Pieper, and Tirone Rogers, who each picked up a run-batted-in. However, PF was not only competing against St. Joe but also against Mother Nature. In the bottom of the fourth inning the game was suspended due to lightning and then the ominous black clouds quickly rolled in. The game was suspended until Friday, July 17th, and the field was barely tarped when the torrential rains came. But thanks to the hard-working field maintenance crew, headed by Coach Dennis Pieper, the field was worked back into shape and play resumed on Friday. The final few innings were played with no runs being scored.

PF’s next oppenent was Merrionnette Park and they won the game 13-0. The pitchers were Jonathon Fasel, who got the win, and Carl Clayton, who closed the final innings out. There were numerous fielding and throwing errors that led to 8 unearned runs and the remaining 5 runs were punched across by Jonathon Fasel, Tirone Rogers, Mike Milkovic, and two by Josh Pieper. The next stop would be the championship game. 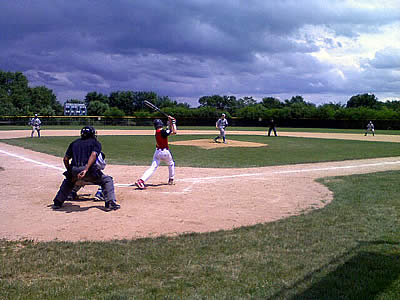 Under overcast skies, the PF took the field against Homewood for the championship, knowing that a loss would force them to an additional game. Homewood was a formidable opponent and had several hits that would normally have been doubles. But not on Sunday. The outfield was patrolled by Josh Pieper (five innings), Tirone Rogers, Terrance Southern (6 innings), and Shon Partee (1 inning.) All of the fans were astounded as the Rogers and Pieper made several catches that you normally only see in an Major League Baseball game. There were six hits that would normally have dropped in for doubles. But it became apparent to all that nobody told these young men this, as they raced, streched, dove, and tumbled their way to clean catches that produced outs.

PF struck quickly in the first inning. The leadoff hitter, Mike Jamison, ripped a single into the outfield. Coach Gifford flashed the bunt sign and Phil Werner executed it perfectly and ended up on second base when the catcher made a throwing error. While this was occurring, Jamison streaked home for the first run of the day. Jonathon Fasel came up to bat and watched Werner go to third base on a wild pitch. The first out came on Fasel’s pop fly. The second out came when Josh Pieper grounded out but, in doing so, Werner scored and gave Pieper an RBI. A strike out came for the last out.

Homewood was held scoreless until the fourth inning, when they pushed two runs across. The score was tied at 2-2 and remained this way until the seventh inning. PF’s Tirone Rogers singled to begin the inning and was moved to second by Carl Clayton, who also singled. Mike Milkovic laid down a sacrifice bunt for the first out, with the runners advancing to second and third base. With runners threatening to score, Ben Gifford dug in at the plate and lifted a high fly to centerfield, which enabled Rogers to score easily. This RBI for Gifford put PF ahead. The third out was made and PF took the field with a lead once again.

The first batter took the ball to centerfield but Rogers was ready. He sped to left-centerfield and snagged the ball for out number one. The second batter did not fare any better when he took the ball to dead centerfield; Rogers made the catch for the second out. The third batter tried it yet again but to no avail. Rogers had a bit of trouble reading the ball, but after several steps back and forward his concentration paid off, as the third out was recorded.

The next stop for this PF team will be the Regional Level being held at Ingalls Park in Joliet. The first game for these young men will be Tuesday, July 21st, at 5:30PM.

On behalf of the Park Forest Baseball Board of Directors, I cannot express how proud we are of this team and the way they represent Park Forest Baseball and the village of Park Forest. With a few additions to this year’s team and a lot of hard work, they have shown that if you have a dream you can achieve it if you believe it. A few of these young men have played in PF Baseball since they were young children and it is very enjoyable and heartwarming to see them thrive and succeed. We wish them good luck in the next round and continued success.