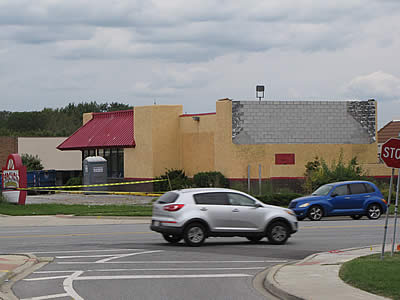 Popeye’s on Western Avenue will be the new home for Bree Breedlove State Farm soon. (ENEWSPF)

Park Forest, IL-(ENEWSPF)- No, the old Popeye’s restaurant on Western Avenue is not being torn down. Nor is it falling apart.

For so long, Park Forester’s have been so accustomed to businesses seemingly closing, they have forgotten what it looks like when a business is about to open.

"Drove by the Norwood Shopping Abandon center.. Theyre tearing down POPEYES chicken and cleaning up around the outside," one member of Grew Up In Park Forest lamented this week on Facebook. "Wonder if anyone is interested in reopening in that building. No one ever bought the old Taco Bell there either.. Maybe they should clear out the lot and open an online training center or college."

No, they’re not tearing down the old Popeye’s Chicken. Instead, it’s being built up. Rehabilitated. Re-imagined.

Imagine an insurance agency with a drive-through window.

Readers of eNews Park Forest may recall the interview above with Bree Breedlove of State Farm Insurance, posted to our YouTube account on May 4 of this year. In the video interview, Bree tells of her then-hoped-for-imminent move from North Street in Park Forest to Western Avenue.

Driving past this week, however, it appears that work on the facade is finally progressing.

We will let Bree remind Park Foresters of what she has planned for that spot.

And, yes, there are plans for the site of the former Taco Bell on Western Avenue.

But that’s for a future report.