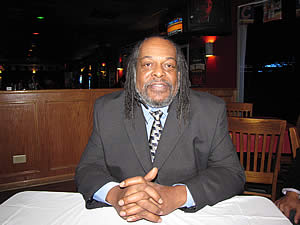 Philip Whorton talks about the cab driver who really took him for a ride at a restaurant in Matteson. (Photo: ENEWSPF)

Matteson, IL-(ENEWSPF)- While the Chicagoland area struggled with the most challenging weather event in perhaps a generation, news sources made mention of neighbors and strangers alike pitching in, helping dig each other out from the more than 19 inches of snow that fell during the Blizzard of 2011. One Richton Park man, however, stranded on I-80, found a cab driver wasn’t feeling the love.

Philip Whorton lives in Richton Park but works in Joliet. He says around 8:00 p.m., while the storm was at its worst, he got off work and began his usual route home, taking I-80 east. Near Mokena, the snow brought his car to a stop, and he was stuck. He pulled over as best he could, called his motor club. A recorded message told him to try local numbers.

At this point, he called the Illinois State Police for help. A trooper arrived within 30 minutes and drove him to the nearest exit, leaving him at a gas station. He remained at the gas station for approximately 20 minutes when he learned there was a hotel about half-a-block away.

He began walking as the wind drove the snow horizontally, during what he says was "the height of the blizzard." Then he saw a cab, a newer model yellow minivan. He only had about 30 yards to go, but, with the wind whipping, decided to ask the driver for help.

Phil took the ride. The hotel had lost its electricity, and the driver accidentally passed the hotel. The driver turned the cab around and came back. When they arrived at the hotel, Phil paid the driver. According to the cab’s meter, Whorton says the ride should have cost just over $3.00. Whorton asked him, "I guess you’re going to make a lot of money tonight?"

"Yeah. I’m gonna make a lot of money," the driver told him.

Phil paid the driver $20. He does not remember the name of the cab company.