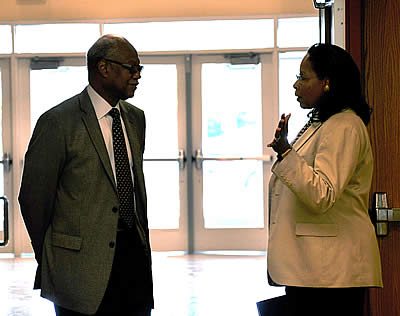 As the kickoff speaker in a series of business, civic and educational leaders who will meet and dialog with the new charter public high school students this year, Clark said that “you will be able to achieve your dreams only if you have a good education.”

Clark began his 45-year career with the energy company that delivers electricity to more than 3.8 million residential and business customers in northern Illinois, in its mailroom and progressed through the ranks in virtually every department of the company until he became its chairman and chief executive officer. He has been named by Fortune as among the 100 most powerful Black executives in America.

“Education is the great equalizer,” he told the 250 freshmen and sophomores who comprise Southland’s student body this year. “You’ll be able to achieve your dreams only if you have a good education,” he said.

Recounting his own history, Clark told Southland students and faculty that he grew up in the Woodlawn neighborhood on the south side of Chicago at a time when there were significant challenges of crime, welfare and other issues. He said that his mother’s admonition to “get an education,” was advice he never forgot.

Clark told the students that although he fell far short of academic achievement during his days at Hirsch High School, he soon had some life-changing experiences when he was drafted into the U.S. Army and served in Vietnam.

“When you’re in combat you quickly learn the value of life. You also learn that racism is not inherent to anyone—it’s only acquired by some people,” he said.

Following his discharge, Clark successfully completed a semester at Loop Junior College earning straight As and was accepted as a “student at large” at DePaul University where he eventually earned a bachelor’s degree and later a law degree.

Urging Southland’s students to discover their own passion, Clark asked his audience to estimate just how many people applied for 60 entry level jobs at ComEd.

“More than 5,000 people applied for 60 jobs. And when we tested them on basic English and math skills, only eight out of every 100 persons passed,” he said. “That’s the real world that you will face unless you really pursue your educational goals, “he said.

“Unless you have a strong belief in yourself, you won’t be able to withstand life’s setbacks. That inner strength is needed so you’ll never give up and will continue to pursue your dreams.”

He urged Southland’s students to invest in themselves by focusing on their studies, listening to their teachers and taking an interest in all that the school has to offer.

The energy company executive advised Southland’s students to “work harder, to remain motivated and you will succeed in life and in whatever occupation or pursuit you so choose.

Commenting on the new Southland College Prep which opened a year ago, Clark told the students that “you have a phenomenal facility here and an enormously qualified group of dedicated administrators and teachers. It will be important for you to take full advantage of an education here, for it will serve you well for the rest of your life,” he said.

Commenting on Clark’s position as a role model in the community, Dr. Blondean Davis, Southland’s CEO, noted that “we’re grateful that Frank Clark would share his thoughts with us, for he travels the same road that we do. He has been an excellent mentor to many and through his service on scores of community boards and organizations has given back to society.”

As a resident of Hazel Crest and Flossmoor here in the Southland area, in a special way, Clark has been a friend to education, she noted.

Southland College Prep offers area students a choice. It is designed to prepare all of its graduates for academic success in college through completion of a degree. For the academic year, 2011-12, 250 students are enrolled in Southland’s freshmen and sophomore classes . Over the next two years, the enrollment is scheduled to double to approximately 500 as set by the Illinois State Board of Education.

Southland is located on eight acres in a three-story state-of-the art learning center with small class sizes, an extended nine-hour school day and a college prep curriculum which emphasizes n foreign languages and the arts.