CTA and CPS Workers Speak Out Against Unjust Actions of their Employers. 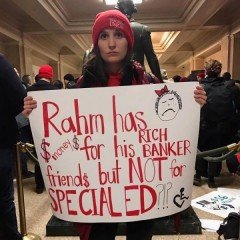 Chicago transit workers, teachers, and allies rally at Labor Relations Board office downtown against suppression of workers rights to organize and freedom of speech.

Chicago, IL –(ENEWSPF)–April 10, 2017.  Transit workers and teachers will be joined by community supporters to protest attacks on workers’ rights today, April 10, at 8 am. They will gather at 160 N. LaSalle St. ahead of a hearing to demand that CTA stop illegally prohibiting worker meetings discussing solidarity with the Chicago teachers and give back the union office space that they removed in retaliation. Participants will also demand that CPS take their hands off Sarah Chambers, a middle school special education teacher at Maria Saucedo Academy in Little Village. Sarah has just been suspended on Thursday and may be fired for being a leader in Chicago’s education justice movement. Already, Sarah has a petition signed by more than 2,000 people calling for CPS not to penalize her for advocating for students in special education programs.

Erek Slater was targeted by the city administration for his activism. He was illegally fired in 2016 for defending his coworkers and CTA was forced to bring him back to work this past December. Erek is a ten year veteran CTA bus driver and an executive board member of the Amalgamated Transit Union, Local 241. He represents over 600 bus driver families at the North Park CTA bus garage. He says, “We are finally getting our ‘day in court’ to get our union office back at our bus garage. CTA management illegally took our office away shortly after I was first elected. In September of 2015 we filed charges with the Illinois Labor Relations Board and the appointed CTA managers and lawyers have stalled for 18 months. We also filed charges against CTA for illegally prohibiting union meetings discussing solidarity with the Chicago Teachers Union. We also alleged that CTA illegally tore down union fliers building solidarity between different sections of the working class. A victory here is a victory for all working peoples’ rights to freedom of speech in the workplace.”

Sarah Chambers is currently co-chair of the Special Education Taskforce. She has been a leader in the organized effort against CPS’s drastic cuts to special education funding and services. Her removal is a clear act of retaliation by Chicago Public Schools for her fierce advocacy of her students and her history of union activity. Sarah’s suspension means her students will be without a special education teacher for the remainder of the year. She also sponsors her school’s Gay Straight Alliance, meaning the future of this club is also thrown into question. CPS’s targeted attack on this leader in the fight for education justice and fair funding for Chicago students is harming the special education students and LGBTQIA students at Saucedo Academy.