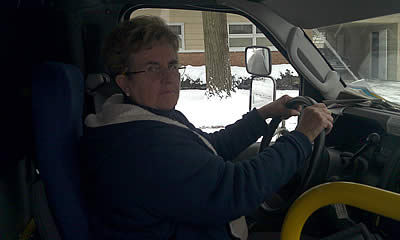 Rosemary Ephgrade behind the wheel of the Jolley Trolley. (Photo: Gary Kopycinski)

Park Forest, IL-(ENEWSPF)- Rosemary Ephgrade has been driving routes for the Jolley Trolley in and around Park Forest since 1979.

Had the pleasure of chatting with Ms. Ephgrade as she drove me to my car, parked on Sioux Street. Friends helped me get to and from South Suburban Hospital Thursday for a test. All went well there, to my relief, but that left my car on the south end of town Friday morning. When I have a car — or, in better weather, my bicycle — getting around town is no problem. After Thursday’s snow, however, it seemed best to leave the car with my friends and retrieve it sometime Friday.

By Friday afternoon, with my friends at work, I needed my car. What to do?

I called for a ride from the in-town-and-around transportation service partially funded by Rich Township and the Village of Park Forest. The ride arrived soon after, only $3.50 for door-to-door service.

My trip started with a ride from Jolley Trolley driver Mike Fuhrman. Mike’s route is primarily north of Sauk Trail, so he asked if I minded transferring to another ride for the ride to Sioux Street. That was fine with me, and Mike dropped me near the Holiday Star Theater where a second Jolley Trolley was waiting.

The driver of this vehicle was Rosemary Ephgrade.

"I love it," the cordial motorist said on this past frozen Friday afternoon, "That’s one of the reasons I stay with it all these years."

Still hoping for a grocery store in Park Forest — as many are — Ms. Ephgrade says she’s glad the Jolley Trolley is still around and happy to be a part of it.

She has been working in Park Forest for a bit longer, owever.

Her first job was with the Kresge Store in DownTown Park Forest. The Crete resident acquired her first work permit at age 15, applied at Kresge’s and got the job. The then-manager of Jewel, also located in the DownTown at the time, was accustomed to eating at Kresge’s. Ms. Ephgrade said she would remind him of her upcoming sixteenth birthday.

"Are you going to hire me then?" she would ask him. On her sixteenth birthday, the manager brought in an application "…all signed," she beams, "And I got hired at sixteen to work at the Jewel."

"Then they went across the way," she continues. "I worked at that one for quite a while."

She subsequently became a school bus driver, moving to the Jolley Trolley in ’79.

You don’t need a reason to call for a ride. To be on the safe side, call (708) 748-4433 at least one hour in advance to reserve trips. The Jolly Trolley picks up passengers on the hour and half-hour at Orchard Park Plaza and the Village Hall in Downtown Park Forest.

Besides the regular Park Forest stops, destinations include: