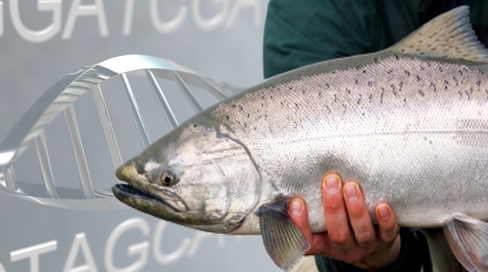 WASHINGTON, DC –(ENEWSPF)–November 19, 2015 – Center for Food Safety today announced plans to sue the Food and Drug Administration (FDA) to block the agency’s approval for sale and consumption of the genetically engineered AquaAdvantage® salmon developed by AquaBounty. The suit will be filed in coordination with other colleague plaintiffs.

“The fallout from this decision will have enormous impact on the environment. Center for Food Safety has no choice but to file suit to stop the introduction of this dangerous contaminant,” said Andrew Kimbrell, executive director of Center for Food Safety. “FDA has neglected its responsibility to protect the public.”

In approving the AquaBounty transgenic salmon, FDA ignored millions of Americans and more than 40 members of Congress who have expressed vocal opposition. FDA also neglects the concerns of more than 300 environmental, consumer, health and animal welfare organizations, salmon and fishing groups and associations, food companies, chefs and restaurants.

Approximately 2 million people filed public comments with the FDA in opposition to this action, the largest number of comments the FDA has ever received on an action.

“The review process by FDA was inadequate, failed to fully examine the likely impacts of the salmon’s introduction, and lacked a comprehensive analysis. This decision sets a dangerous precedent, lowering the standards of safety in this country. CFS will hold FDA to their obligations to the American people,” said Kimbrell.

A study by Canadian researchers found that genetically engineered Atlantic salmon can successfully cross-breed with brown trout, a closely related species common to areas surrounding both AquaBounty facilities, posing serious risks wild populations that are already under duress. Many additional long-standing concerns regarding impacts to wild species and the environment raised during a 2012 Senate hearing remain unanswered.

AquaBounty has also faced criticism for failing to follow basic environmental regulations in Panama, where the experimental fish are being raised. Environmental groups in Canada have sued that country’s government for allowing the GE salmon eggs to be produced there, potentially putting ecosystems and species such as wild salmon at risk

“FDA has not acted in good faith with the American people. Rather than informing the public, FDA’s announcement appears to be intended to minimize public awareness,” added Kimbrell.

Consumers concerned about their personal health may not be able to avoid the fish. While 9,000 grocery stores and numerous restaurants have vowed not to sell the GE fish, lack of labeling laws mean that average consumers will not have a choice.