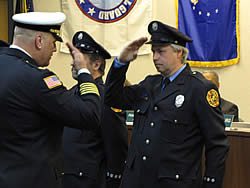 Park Forest, IL–(ENEWSPF)– Firefighter/Paramedic William Toberman, Jr., was named Park Forest Firefighter of the Year in a ceremony recently at Village Hall. Toberman has been a career member of the Park Forest Fire Department for 18 years, beginning his career on August 26, 1991. The citation honoring him called him a "role model for young firefighters," and "a consummate professional."

The Firefighter of the Year award is presented to the Firefighter who best exemplifies by his/her performance the principles and purposes of the fire service and the Park Forest Fire Department. This award is open to all ranks of the Park Forest Fire Department. The Board, when considering nominees, reviews the record of the nominee with special attention given to the preceding year. Such factors as performance, measured by evaluations and supervisors observations, attendance, appearance, dedication to duty and efforts toward self-improvement are considered.

Firefighter/Paramedic William Toberman Jr. has been a career member of the Park Forest Fire Department for 18 years. Beginning his career on August 26, 1991, Fire/Medic Toberman has always been an actively engaged in department activities and serves as a role model to younger firefighters. Fire/Medic Toberman currently serves as the Shift Engineer and given his tenure routinely acts as the Acting Shift Officer in the Lieutenant’s absence. Regardless of his assignment Fire/Medic Toberman always conducts himself as a consummate professional.

Fire/Medic Toberman takes great pride in passing-on his knowledge and expertise to probationary firefighters. Because of his mechanical skills and his experience as an Engineer, Fire/Medic Toberman recently assisted several new firefighters obtain their State Certification as Fire Apparatus Engineers. On a daily basis, Fire/Medic Toberman’s actions set him apart as he is always the first to help on a project or to fill in when or wherever necessary in the advancement of our department’s mission.

Fire/Medic Toberman is also the department mechanic and is frequently called upon to repair department equipment, many times after hours or on his days off. Without hesitation, he will schedule service or return to the station to place a vehicle or piece of equipment back in-service. This commitment to duty is indicative of what Fire/Medic Toberman brings to the job each and every day.

Firefighter/Paramedic William Toberman Jr. is selfless and he exemplifies all the qualities of a natural leader. His performance and professionalism are in keeping with the highest traditions of the Fire Service and reflect credit upon himself, the Fire Department and the Village of Park Forest.

On the morning of February 16, 2009, Firefighter/Paramedics Tracy Natyshok and Patrick Hisel, as members of Ambulance 61, responded to a call for an unresponsive asthmatic patient in respiratory distress. Upon arrival Fire/Medics Natyshok and Hisel found a 70 year-old unresponsive female patient with a life threatening respiratory rate of 8 per minute. Given her medical condition, Fire/Medics Natyshok and Hisel immediately reestablished the patient’s airway via a nasal airway and requested additional assistance to the scene. The ambulance crew was able to provide ventilation assistance and necessary drug therapy which greatly improved the patient’s condition. Staff car 72 responded with Fire/Medics Edward Dionne and William Toberman Jr. who joined the team providing Advanced Life Support care to the patient who was transported to St. James Hospital for more definitive care.

The efforts of this crew certainly changed the course of the patient’s condition and their actions were also recognized by the South Cook County Emergency Medical System with the presentation of an Outstanding Call Award for these efforts.

Firefighter/Paramedics Natyshok, Hisel, Dionne and Toberman Jr’s devotion to duty is in keeping with the highest traditions of the Fire Service and reflects credit upon himself, the Fire Department and the Village of Park Forest.