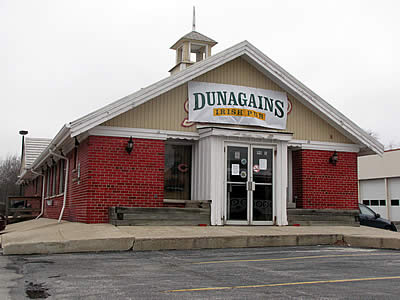 Park Forest, IL-(ENEWSPF)- Halloween was neither a Trick or a Treat for many in Park Forest when Tattlers served its last call. However, Bob and Amy Gain, owners of Dunagains Irish Pub, hope to usher in the Luck o’ the Irish for the New Year, with first call set for Noon on January 1.

"We’re excited, that’s for sure," Amy Gain told ENEWSPF Saturday. The pub will not have a full kitchen initially. "We’re doing basically a pub/bar, fried foods and pizzas, because the bar tenders will be cooking for the time being."

"We figured it’s easier to expand than to contract," husband Bob added. "We’re definitely getting started on a very limited budget, rolling a huge set of dice on this one. Doing it by ‘baby steps’ would be easier for us to build it up as the business grows."

Bob tended bar and more at Tattlers for eight years and says Barb Gallagher, owner of the former bar, has been a huge help as they worked to re-open the doors. Barb will be available to cater luncheons for 15 or more at Dunagains. "They could basically come in and have the place to themselves from noon to 4 p.m.," Amy said.

"We have new freshly-felted pool tables and a new jukebox box, new dart board." Amy said. "We’re going to have the new Golden Tee Golf 2012." Golden Tee Golf is scheduled to be in the pub Tuesday.

The business will offer weekly specials including free pool and $0.50 off mixed drinks on Mondays; $2.00 Tuesdays for domestic drafts and domestic bottles, Wing it Wednesdays offering $0.50 wings and $1.00 off pizza and more. More details are on the pub’s Facebook page.

Both Amy and Bob say they were very satisfied working with Village officials as they approached opening day, "We had an interview with the mayor on the 19 [of December] and we wanted to open on the first. All their ducks were lined right in a row."

Both added that the Fire and Police Departments were very helpful and accommodating.

The couple also wants to start a dart league and hopes to open a Beer Garden outside in the spring.

Bob and Amy are Park Forest residents, Bob since 1978. "Outside of my stint in active-duty military, this has pretty much been home," Bob said. He still serves in the Army Reserves as Sergeant First Class, a member of the armed forces for "twenty-two years and counting," currently managing the Army’s training program in Homewood.

"He was in the original Gulf War," Amy said, "which blows my mind because I was still in high school." Bob served in Iraq in 1990-91 and again in Iraq when he served in the first rotation in 2003.

The couple says the biggest challenge preparing for the opening was arranging for financing. "We were actually working with Barb on this for a long time," Bob says. "We finally got ourselves down to a working set of capital where we were able to get ourselves in. That’s a lot of the reason we’re starting off scaled back as we are."

The Gains have two daughters, ages 9 and 10, "Soon to be 11 and 10 — why do they grow up so fast?" says Mom, then adds, "That’s another reason for the limited hours. Bob and I, currently, are the only employees, except on Sundays we have bartenders to give us the day off." It’s family first for the two, "We do have two kids so I can’t be here from 11 a.m. to 2 a.m. every day."

Doors will open at noon on Sunday, January 1, for the Bears game, and at 11 a.m. on Monday, January 2, to accommodate those who wish to spend Monday at the pub watching bowl games.

"We’re having a College Bowl Game Party Monday," Amy said. "The bowl games start at noon, so, if people want to get here and see them from the beginning, they can." They will offer free food during half time of the Bears game and a free "while-supplies-last" Taco Bar on Monday beginning around 2 p.m.

There’s a story to the name of the pub, "Dunagains." "Gain is my last name," Bob said. "The letter ‘A’ before it is actually her [Amy’s] first initial. It has the Irish overtone with ‘Dunagains,’ but spelled a little differently, to say this place was a bar, and now it’s a bar again, so it’s been ‘done again."

Their hopes for the community? "A lot of people that I’ve spoken to since Tattlers closed Halloween, some of the local ‘regulars’, one of their saddest revelations was, ‘Wow! Now I don’t have any place within walking distance to go to.’ You don’t know what you have until it’s gone."

Well, now it’s back, Park Forest. Join Dunagains for First Call on New Years Day, and the many, many First and Last Calls to come.