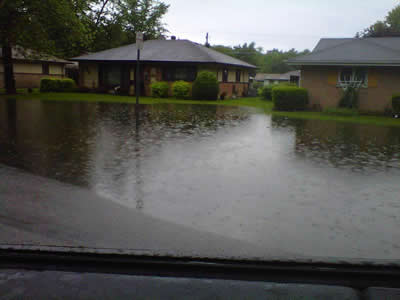 Park Forest, IL-(ENEWSPF)- Officials in Park Forest report flood damage throughout the village in the wake of severe thundershowers that deluged the area this morning. Flooding under the Orchard Drive viaduct stranded one motorist who was rescued by a Public Works employee. The vehicle was submerged up to the windows, Acting Village Manager Mary Dankowski said.

This morning I drove around Park Forest to observe the flooding that was taking place because of the heavy rains we experienced. It appeared that the heaviest problems were on the streets in the southern portion of the Village, where several streets were not passable. Park Forest Public Works personnel were on hand at key traffic locations to make sure any debris that was in the water didn’t block storm sewers and prevent the water from flowing properly. The greatest problems occurred because the storm sewers were at maximum capacity and simply couldn’t carry the water away fast enough. However, in the Sioux Street neighborhood the flooding appears to have been caused by the Village of Richton Park pumping water from one of its subdivisions onto a roadway which then flowed down onto Sioux Street and caused a "river" for about three blocks. I have raised concerns with Mayor Rick Reinbold of Richton Park about this.

Since more rain is predicted for this evening, I urge citizens to be very cautious in passing down flooded streets.

First of all, never drive into water where you cannot determine exactly what the depth might be.

Second, if you are traveling onto a flooded street, drive very slowly in order to keep the water from flooding out your engine.

Third, make sure you are cautious not to drive over any tree limbs or other debris that may be hidden in the water, as doing so can cause serious harm to your vehicle.

Park Forest Public Works and safety personnel will be monitoring the situation closely and will seek to have problem spots cleared as quickly as possible. Obviously, areas that have the heaviest traffic will be handled first. 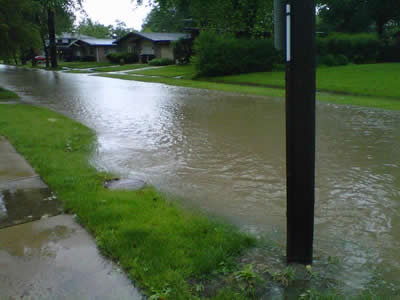 According to Mary Dankowski, Public Works and Police staged barricades and directed traffic near the Orchard Drive viaduct and through the rest of Park Forest as was needed.

Dankowski says the Health Department and the lower level of Village Hall experienced flooding, mainly from the foundation drainage associated with the Marshall Fields’ demolition. Recreation and Parks staff have been cleaning all morning, she says.

In addition, Dankowski reports Thorn Creek overflowed and the bridge into the Thorn Creek subdivision was impassible for most of the morning. The water has since receded to the top of the bridge and traffic can pass. Somonauk Park is completely flooded.

In a phone interview, Mayor Ostenburg said he saw Public Works employees wading into knee-deep waters attempting to clear storm drains so the waters would subside. On Lakewood Boulevard, the mayor saw water gushing up from a storm sewer. "The lid on the drain was quivering," Ostenburg said, as water forced it up.

"Richton Park is impacting the water flowing down Sioux Street with pumping from their subdivision," Dankowski says. "Now that the rain has stopped we hope for some relief provided we don’t get hit with additional rains." 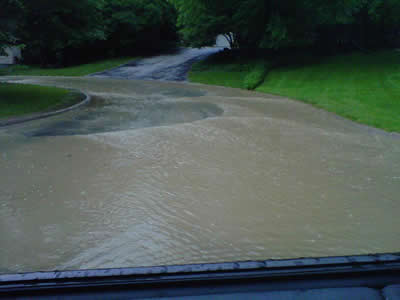