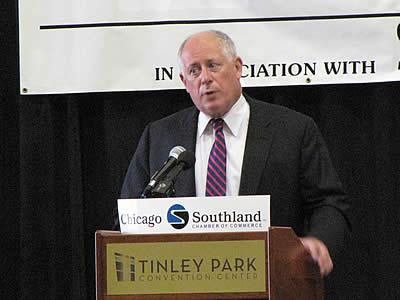 Tinley Park, IL-(ENEWSPF)- Governor Pat Quinn took a bet he could get through his public comments without mentioning the gaming legislation, passed by the Illinois legislature, but not yet on the his desk. Speaking for almost 25 minutes before signing two bills and taking questions, Quinn reiterated his support for the third airport and his determination to make the south suburbs an "inland port" for transportation. He did not mention the gaming legislation favored by many in the south suburbs.

To his credit, saying he believes in accountability, Quinn did not parry when asked about the bill during the question and answer session that followed.

"The gaming bill is being held by the senate. They passed it on the last day of the legislative session, but in a curious maneuver, they have not sent it to the governor, myself."

The governor mentioned that the bill is 400 pages long, but "that hasn’t deterred us from analyzing the bill. You really have to look at it extremely carefully because there’s all kinds of provisions in it, some of which have been publicized, some have not been publicized."

Moving on, the governor said he has tried to listen to both proponents and opponents of the bill.

"I know there is a provision for a south suburban casino in the bill," Quinn said. 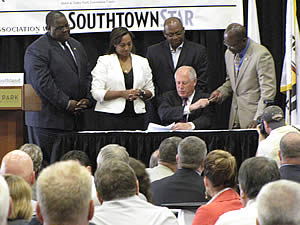 Reminding the attendees that the Des Plaines casino is due to open, the governor said Des Plaines has agreed to share casino revenues with ten communities, "and a number of them are in the south suburbs and the south land."

Gov. Quinn spoke in high regard regarding the Illinois Gaming Board, now entering its third decade of existence. "We have to be pretty pleased with the fact that the [Illinois] Gaming Board has really run a scandal-free operation," the governor said. "We cannot allow any kind of expansion of gambling to occur where there are any questions of integrity. So far, we’ve been able to keep bad elements out. We have a tough gaming board, a fair gaming board. I have a lot of confidence in their ability to do the right thing all the time.

"That’s one of the things I’m looking at as I look at this bill," Quinn concluded, encouraging those in attendance and any others in Illinois to contact his office and share their opinions on the legislation.

State Senator Toi Hutchinson explained to ENEWSPF why the senate has not sent the bill to the governor for his signature, "It’s a parliamentary move over concerns that he may veto it."

Hutchinson expressed concerns that the governor might approve a casino for Chicago but not permit a casino in the south suburbs, "Don’t strike us out," she said. "I’m tired of seeing Illinois plates in the Indiana [casino parking] lots."

At Monday’s meeting of the Park Forest Board of Trustees, Mayor John Ostenburg told the board and the public Gov. Quinn did not express strong support for the gaming bill during a meeting with mayors immediately after the luncheon. Ostenburg said the governor has "severe questions" about some parts of the legislation.

Mayor Ostenburg said the governor told the mayors he questioned why there should be a casino in the south suburbs if there is a "race-ino" in Balmoral Park, referring to the provision that allows race tracks to have slot machines. "He kind of put that challenge to the mayors, does it make sense that you’re going to have these two competing elements going on simultaneously?"

Ostenburg said the governor did ask for continued input as he considers the legislation.

Trustee Gary Kopycinski later said at the board meeting that he "shook the governor’s hand" and encouraged him to sign the gaming bill "as is."I don’t like the rhetoric where [Gov. Quinn] is talking about a ‘race-ino’ with the racing tracks. The racing industry is very important. In other areas of the country, Indiana, Pennsylvania, New Jersey, where the casinos have been permitted to have slots, that has been a real plus for the industry."

Mayor Ostenburg responded that the governor was concerned about two entities so close by, and asked "Why could not the race track be expanded to be a full-fledged casino in addition to being a race track and have one entity? Then have the race track share its revenues with the various municipalities in the area." Ostenburg said, as the legislation stands now, there is nothing that mandates Balmoral Park to share revenues with any municipality beyond the Village of Crete. "I think his position was, if in fact you’re looking for something that’s an economic trigger, you need to have something that doesn’t cannibalize one from the other."

House Floor Amendment No. 6 in the bill appears to make revenue sharing a valid criteria regarding consideration of a license for a municipality, "In a provision concerning whether to grant an owners license to an applicant, provides that the Board shall consider the extent to which the proposed host municipality plans to enter into revenue sharing agreements with other communities and the terms of those agreements." Further, any "tax revenue deposited in the State Gaming Fund and paid to a host municipality may not be shared with any other unit of local government."

Perhaps the governor will flip a coin?