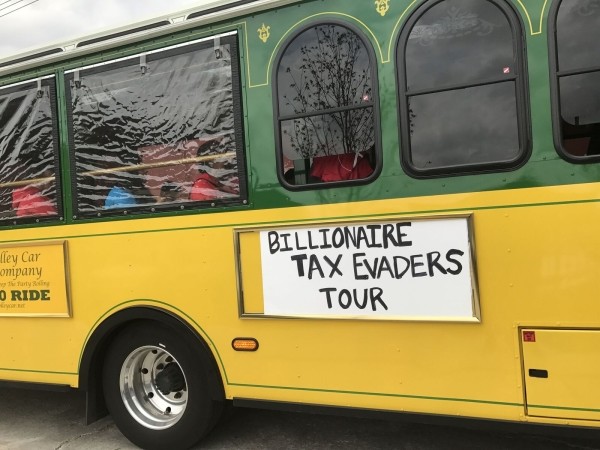 Chicago, IL –(ENEWSPF)—April 21, 2017.  On Thursday, community residents being impacted by the school funding crisis and state budget impasse took part in a Tax Evasion Trolley Tour to the homes of Hedge Fund political donors who have profited off of the carried interest loophole at the expense of schools and vital social services.

The first stop on the trolley tour was the $20 million dollar home of Donald Wilson, founder of DRW Trading Group. Wilson has personally benefited from the carried interest loophole and made significant political contributions to both Governor Rauner and Chicago Mayor Emanuel. Participants were joined by Representative Welch (D-Hillside), lead sponsor of HB 3393, a bill that would generate close to a half billion dollars by placing a privilege tax on people like Wilson.

“It’s okay to own a nice home, everyone dreams of being successful and living a good life. But to those who much is given, much is required. What we are saying is if you have the privilege to live in a $20 million dollar house you should pay your fair share in taxes and that means closing the carried interest loophole,” stated Representative Welch to the energetic crowd.

Alejandro Sanchez, Safe Passage program coordinator with the Brighton Park Neighborhood Council added, “In our community, shootings have increased by 300% between 2013 and 2016. I have a question for Don Wilson and others like him who are profiting off of this loophole. Do you think that skimping on your tax bill is worth students in Brighton Park losing their after school programs and guidance counselors, or domestic violence centers being closed, or more young people dead because of massive disinvestment in anti-violence programs?”

Participants left sidewalk messages outside Wilson’s home, citing the devastation caused by the state’s lack of sufficient revenue. In addition to visiting Donald Wilson, the Tax Evasion Trolley Tour went to the homes of Sam Zell, Ken Griffin, and Dmitry Balyasny, all deep-pocketed political donors who have capitalized on a rigged tax system resulting in the current school and state funding crisis.

“The impacts on our communities are real – increasing violence, students forced to stop their college educations, seniors going without home care and needed programs like meals on meals, immigrant families losing programs that assist them, and the prospect of our schools being closed 3 weeks early, due to lack of revenue. We organized this tour because these impacts feel real to us, but standing here in front of multi-million dollar mansions, it’s hard to imagine they feel real to these Hedge Fund managers. We want them to know that the money they are getting from the carried interest loophole isn’t being pulled from thin air – it is coming from our community programs and schools,” explained Abbie Illenberger, Field Director of Grassroots Collaborative.

Grassroots Collaborative expects HB 3393 to be voted on in the Illinois House next week.