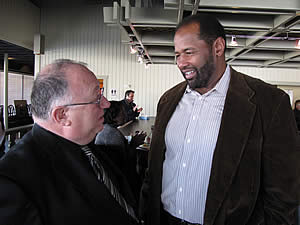 Park Forest, IL-(ENEWSPF)- He made such a "Dent" in the NFL that he was elected to the Hall of Fame. Now, Bears great Richard Dent wants to make a "Dent" in Park Forest with an energy-technology initiative.

Mayor Ostenburg and Village Manager Tom Mick received some quizzical looks at Thursday’s quarterly meeting of the Park Forest business community at Dining on the Green, each referring to a "special guest" who was scheduled to arrive. The last time those words were spoken at that location, residents and children were gathered in early December waiting for the arrival of a jolly elf, old St. Nicholas.

Santa did show up in December, and Richard Dent showed up Thursday to a standing ovation from Park Forest’s business community.

The idea is to advance the idea of "smart homes," Lynes says. "We’ll start with weatherization programs, introduce smart appliances, build a ‘smart grid.’ What we learn in the lab about our technologies, we will apply to job training programs. We will begin to hire and educate people in the community, to take those technologies that we have in the lab, and implement them in their community."

Why Park Forest? As one of Dent’s associates, Deb Marcucci told eNews Park Forest that the name "Park Forest" sounds right for this project, "Park Forest should be Lake Forest."

Fingers crossed, this is a glimpse of the future, happening in Park Forest, today.