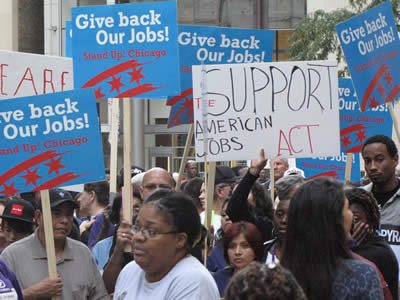 Chicago, IL-(ENEWSPF)- Several hundred people gathered at Daley Plaza today as part of five "Occupy Chicago" events prior to a march to the Art Institute. There were only three Chicago Police Officers on hand as the rather orderly crowd carried signs, chanted slogans and beat drums. Representatives from the Service Employees International Union showed a rather strong presence while ENEWSPF was on hand, but other union members were on hand as well, including the United Steel Workers and one man to told ENEWSPF that he was the union representative for Park Forest School District 163.

While some in the American media have been critical of a perceived lack of message, those gathered at the Daley Center today were unanimous in their call for jobs, with several calling on those on Wall Street to pay their fair share of taxes. Occupy Chicago emerged from the Occupy Wall Street protests, now several weeks along.

The protests were largely ignored by the main stream American media. eNews Park Forest, an independent media source, has been covering these events since they began.

"I’ve seen how things have really changed in the past year as far as people’s opinions about teachers and other public service workers," said Dawn, a teacher from Justice, IL. "I’ve appreciated the support we’ve gotten from other people, so I’m here to support everybody else who’s trying to get their jobs back."

A woman from Melwood, IL, told eNews Park Forest said she attended to support "our economy, get a message over to the CEOs: bring back jobs to Chicago!"

A member of the United Steelworkers from Plainfield, IL, thinks things have gone too far, "You’ve got most of the people with no money and a few with a lot of money [who] want to keep making it worse and worse. In a democracy, that doesn’t work. That’s why we’re here." 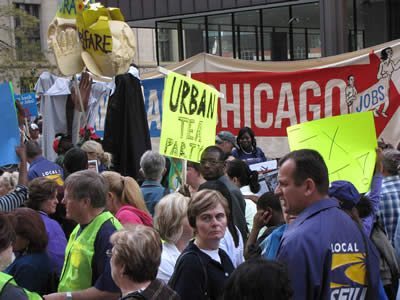 "We’re here protesting jobs leaving the United States," one woman told ENEWSPF. "Also, people going into foreclosure and not getting help with their homes. The government gave money to the banks to help the homeowners – they’re not doing it. The middle class has disappeared. I want the people that make the big money on Wall Street to pay taxes like I do, to actually pay what they should be paying. And no more medicaid and medicare cuts because the seniors need that to survive."

Takenia Turner said she’s concerned about funding for education, "Now is the time to do something about this. So, stand up Chicago!"

Later, thousands of protestors converged on the Art Institute of Chicago where a reception was set to take place Monday evening for members of the financial futures trading industry, according to ABC Chicago (Video here).

Marches are scheduled to convene tomorrow beginning at 9:45 a.m. according to Occupy Chicago’s website.

Leading Ladies Debuts in August at the Drama Group