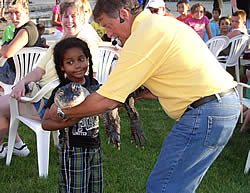 Park Forest, IL–(ENEWSPF)– Park Forest’s elected officials, management and staff continue to be busy with current projects and events along with future planning.

Park Forest residents are reminded that the Village Trustees will meet in a modified summer schedule. The final Board meeting for July will be held on:

Residents are encouraged to attend.

The Village Board and Management Team conducted a neighborhood meeting on the south end of the community recently. More than 65 residents were in attendance to hear presentations by Village Officials and to have their questions answered regarding any number of Village programs, policies and concerns in the community. The Neighborhood Meeting Program has been in place since 2004 and has since included multiple meeting stops in every neighborhood of Park Forest. For more information about the program, please call the Village Manager’s Office at 708-748-1129.

Village Manager Tom Mick attended two meetings related to the SSMMA last week. A Management & Finance Committee session included discussion of any number of statutory regulation changes that will necessitate consortium-wide training so as to have professional staffs of member communities as up-to-date as possible in understanding what has been revised and the potential impacts on municipal operations. The Technology Committee Meeting focused on the ongoing project of tying to establish a broadband internet access project that would enhance technology capacities for public safety, economic development and educational institutions across the 42 communities in SSMMA. A grant application for stimulus funding will be crafted for submission by mid-August.

At this past Monday’s Board meeting, an Identity Theft Policy was presented for Village Board discussion in response to Red Flag Rules mandated by the Federal Trade Commission. The Identity Theft Policy specifically applies to utility accounts. Village staff will follow the policy when opening up new accounts, responding to customer questions or “red flags.” Questions regarding the policy can be directed to Assistant Finance Director Stephanie Rodas at 708-283-5626.

Work is wrapping up on the installation of nine security cameras throughout the Village Hall. The initiative is aimed at enhancing public safety throughout Village Hall.

When the temperatures soar and you need a place to cool off, remember that Village Hall (350 Victory Drive) and the Park Forest Police Department (200 Lakewood Boulevard) are the community’s designated cooling centers. Village Hall is open during routine business hours while the Police Department is open 24 hours. Also, please remember to periodically check in on family, friends, neighbors, and the elderly to ensure that they are adapting well to the heat.

This week, 200 inspections were performed. These included new construction, re-occupancy, inspector initiated and referral/complaint. In new construction/building permit activity in the first 13 days of July, 32 permits have been recorded. Over the past 5 years, the month of July has averaged 66 permits being issued. At the current pace, 76 building permits could be issued this month. In July 1008, a total of 79 building permits were recorded.

In Civil Court action on property maintenance code enforcement matters, the Thorncreek cases were up for status hearings.

Deepest sympathy is extended to Firefighter/Paramedic Bill Toberman on the loss of his sister, Susan White who recently passed away after a battle with breast cancer. Our thoughts are with the Toberman family during this difficult time.

Firefighter/Paramedic Ed Dionne underwent surgery recently for a work-related back injury. He was released from the hospital and is now resting and recuperating at home until he can begin physical therapy. We wish Ed a speedy recovery.

The Citizen’s Police and Fire Academy was conducted last week at the Fire Department, where the citizens were shown how ladder placement and fire hose handling is used during a fire.

The participants from the court-ordered community service program cleaned up the Lakewood, Central Park and Eastgate areas.

Watermain breaks were repaired at 56 Monee Road and 363 Osage. Parking lot lights were relamped/repaired in Commuter Lot 2. A B-box was replaced at 137 Sauk Trail. Street lights were relamped and sanitary sewers were cleaned. Tress were trimmed at Well #7 in anticipation of work being done there.

The second unannounced safety audit took place on July 12. Once again the staff performed very well. Jason Miller and Craig Kaufman helped the Recreation & Parks staff use segments of the first video-taped safety audit in mid-June for a piece on the lifeguards to be put on the Village’s website and Facebook page.

Carolyn Hoff is busy assembling material for the Fall 2009 Program Brochure due to be mailed to residents in late August. Carolyn and other office staff have also been busy preparing for the Park Forest Scenic 5 Mile Run on Labor Day. Volunteer postcards have been sent out and volunteer shirts have been organized for distribution. A Village-wide department representative meeting was held last week to plan details for the 2009 Scenic 5 and More event.

John Joyce and Kevin Adams met with a Park Forest resident who is involved in the South City Jaguars youth tackle football league. This resident has a very impressive program and is interested in bringing it to Park Forest. Even with a number of Park Forest kids, his team is now operating out of Riverdale. This prospect was discussed with Recreation & Parks Board at their meeting last Tuesday.

The painting contractor started work this week with re-painting of the concrete floor in the theater. The re-carpeting will be done this week. New seating is scheduled for installation in late August.

The modifications to the fence at the main entry gate area were completed last week. Registration is now up to 54 dog owners and an estimated 60+ dogs. A number of non-residents from Richton Park, Steger, Homewood, Crete, Mokena and several other neighboring communities have registered.