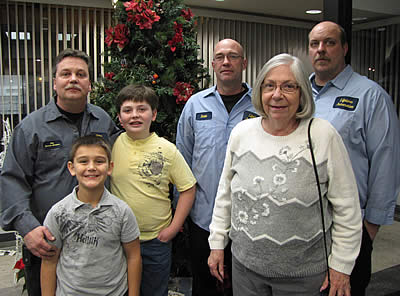 Admitting he was nervous to appear before the public and receive the award, McDannel admitted this was a "great end-of-the-year surprise."

In recognizing Mr. McDannel, EDAG Chairman Sam Montella told the Village Board and the public, "James started working at 10 Norwood Drive as a trainee and worked his way into the manager’s position. James went on to other things in his life, but then returned in 1996 to lease the site as the new owner of the business. And, as a surprise to him, within six months of being a tenant, he was able to buy the property.

"Since then he has been a stable figure on the northwest corner of Western Avenue and 26th Street, in good times and in the not-so-good times.

"His longevity gives proof to his statements."

"In return," Montella continued, "James has shown his gratitude as a prime sponsor in the Village’s quest for the 2006 All America City Award in which the Village was a finalist. In the past, he sponsored a float in the July 4th Parade. He is always available for (Park Forest) Baseball sponsorships and the Safe Halloween program.

"In March of 2011 James volunteered to participate in another Park Forest Business Scavenger Hunt. He adjusted his hours to accommodate that particular event.

"He is an active participant in all of the cooperative advertising initiatives organized by the Village, which includes door hangers and inserts.

"It should be noted that the three business of the year recipients have been long-time businesses in Park Forest, which speaks volumes to our residents who buy ‘Park Forest,’ and we should always spread that word."

Chairman Montella then presented the award to Mr. James McDannel.

An obviously beaming James McDannel expressed his appreciation for the award, "I’d like to thank you all for this wonderful award. I’m honored…, and greatly appreciate the recognition for all the hard work we’ve done over there on the corner. I’d also like to thank Mr. P.C. Smith and all the members of the EDAG committee who voted for us; my wonderful family for all their support; my fantastic staff, without them I wouldn’t be standing here today."

Appearing a little choked up, Mr. McDannel offered final thanks to his clients, "The most important thanks would be to all my customers. I can’t thank you enough for all the patronage over the years, all the great friends I’ve made. It’s just been a great experience."

Mr. McDannel concluded by looking forward, "From all of us at Lifetime Automotive Repair we’d like to wish everybody a happy and safe holiday season, and thank you all again!"

Mayor Ostenburg commended Mr. McDannel on his "commitment and dedication" to the Park Forest community. Ostenburg thanked the members of EDAG for once again selecting "an outstanding recipient" for this award, "You well deserve it," Ostenburg told Mr. McDannel.