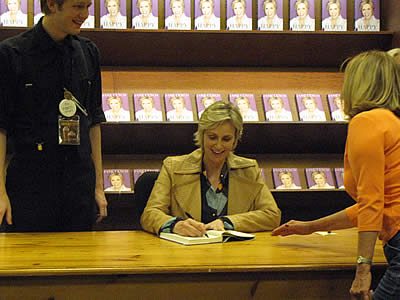 Stunning, actually. My second thought was of Billy Crystal, and how "mah-velous" would sound in a story about Lynch.

Jane patiently signed copies of her memoir, Happy Accidents, visiting with each of the 200+ who stood in line to meet her.

Why did I drive to Skokie to meet Jane Lynch? I was intrigued after reading about her memoir in the Southtown Star Friday:

She steadily built a name for herself as an actress whose unique comedic skills caught the attention of the powers that be in film and television.

But the pressures of the acting life pushed her to alcohol abuse, and she spent decades conflicted about her sexuality (she finally came out to her family at age 32).

Through therapy, she said, she conquered her demons.

After working with GLBTQ teens for over two decades, felt it was worth it to meet such a powerful role model for our youth — and adults.

An eNews Park Forest reader recently wrote and asked why we have a Gay and Lesbian section on our home page. I responded saying that, while our GLBTQ brothers and sisters only represent about 10% of the population, they seem to receive an inordinate amount of negative press. The writer responded and told me that the number was perhaps closer to 2%.

The fact is, our GLBTQ brothers and sisters are beat up daily in the press, daily by some pols, and, literally, daily in our schools and on our streets.

I cringe wondering how many GLBTQ teens were bullied in our schools, and in schools worldwide, after recent comments by Pope Benedict XVI on gay marriage.

To Jane Lynch, I say, "Thank you!" Your openness and honesty will save lives.

You will save lives.

What do I mean by that?

Perhaps, because of Jane Lynch’s courage, another Jamey Rodemeyer may decide that it’s worth his – or her – while, to live another day.

In the few moments I had to visit with Jane Lynch today, I told her, "Thanks." Told her I have worked with LGBTQ youth, and I thanked her for telling her story.

I would add, "Thank you for saving lives."

Because that is just what she did when she found the courage to tell her story.

Because of her, because of Jane Lynch, some teen will choose life, in spite of the bullying.

And that will make all the difference in the world. 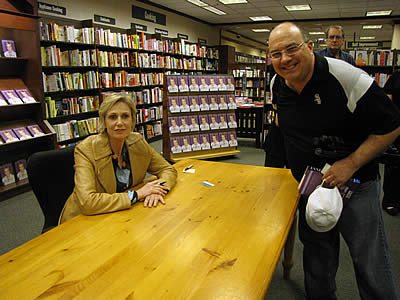 Jane Lynch, looking a bit worried about the man in the Sox shirt. (ENEWSPF)