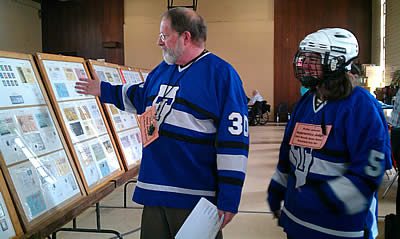 Judge Kathy Johnson, mother of an ardent hockey player, planned the “hockey” themed judging. She and Judge Rich Drews of Palatine, an American Philatelic Society judge since 1984, wore hockey outfits throughout the show. Conducting a critique at the frames for exhibitors, they carried out the hockey theme with a whistle and talk of errors. Being good sports, they wore their unusual outfits until the end of the banquet that evening. Conventional philatelic awards were made, but the team of Drews and Johnson added some extra awards consisting heavy hockey socks, worn as sleeves at the banquet as well as a hockey puck to President Alexis Kneeland for the puckish humor in her exhibit Take Notes.

Stamp collectors from Illinois and Indiana attended PARFOREX 2012 to see the exhibits and to shop for world-wide stamps, and collections at dealer tables. Dealers made free appraisals of stamps and collections. The Kids’ Booth offered free stamps and fun activities for young patrons

More than 500 pages of competitive exhibits prepared by club members from novice to national award winners covered varied philatelic subjects including the Olympics. German Unification, the Caroline Islands, the Bahamas and Snark Island. An unusual category, Cinderella stamps, not valid for postage, was shown by Tony Go.

Each exhibit was awarded a 1st, 2nd or 3rd place ribbon. A few of the awards that should be noted, were the Grand Prize Award received by Larry Gardner for The French ­­­Post Office in Morocco, the Collector’s Club of Chicago Awardt to Bill Maddocks for Death by Overprint and the Best One Frame Award for The Lunar New Year. to Eric Bridge.

Members of the Park Forest Stamp Club look forward to hosting the show again next year.