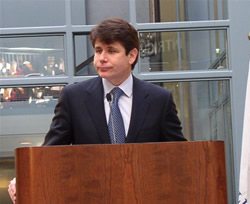 Chicago, IL-(ENEWSPF)- In the end, was Blagojevich right? "This is the way things are done in Illinois politics," the fomer governor once said.

The jury disagreed, finding Blagojevich guilty on 17 of 20 counts.

Blagojevich was found guilty on all wire fraud charges, guilty on two counts of attempted extortion, guilty on all charges regarding the racetrack bill and three charges relating to the United States Senate seat vacated by Barack Obama after Obama became president.

He was found not guilty on one count relating to the tollway plan. The jury returned no verdict on two counts.

Before he left the court house, the former governor simply said he and his wife wanted to get home to see their "little girls." It appeared that both he and wife Patty had been crying.

Here are the verdicts: