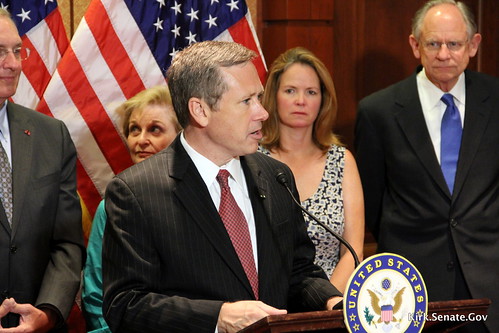 We should apply the lessons learned from Fukushima to protect the people of Illinois.  The disaster at Fukushima is an opportunity to upgrade the safety of nuclear reactors in America.

WASHINGTON–(ENEWSPF)–July 28, 2011.  Following the release of the Nuclear Regulatory Commission’s (NRC) Task Force report, which was unveiled 90 days after the Fukushima nuclear crisis, United States Senator Mark Kirk (R-Ill.) today spoke to NRC Chairman Greg Jaczko and Task Force members to offer comments on the report and deliver a strong message that nuclear power production must continue in light of the events at Fukushima. With the state of Illinois relying on nuclear power for nearly half of its electricity and being home to more nuclear power plants than any state in the country, Sen. Kirk urged the NRC and the nuclear industry to implement immediate and long-term safety improvements.

“We should apply the lessons learned from Fukushima to protect the people of Illinois,” Senator Kirk said. “The disaster at Fukushima is an opportunity to upgrade the safety of nuclear reactors in America.”

6) Expanding Emergency Planning Zones around U.S. nuclear plants from the current 10 mile radius to approximately 12.5 miles, as used in Japan

Sen. Kirk urged the NRC to move nuclear waste from the Lake Michigan shoreline. At the decommissioned Zion nuclear power plant, 1,000 tons of highly radioactive waste are stored just 200 yards from the shoreline. The Great Lakes are the source for over 90 percent of America’s fresh water. Sen. Kirk urged the NRC to approve the Yucca Mountain facility to protect the Great Lakes ecosystem.