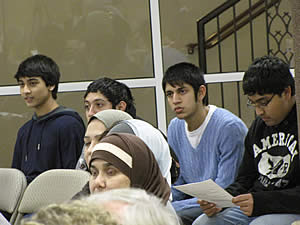 Some teens in attendance at Sunday’s forum on "the Lowes Incident." (Photo: Gary Kopycinski)

Orland Park, IL-(ENEWSPF)- What does the decision of Lowes to pull advertising from the TLC show "All American Muslim" mean for the future of Muslim Americans in the media and elsewhere? Why would a Fortune 500 company cater to a small lobby group which sought to distort the image of Muslims in America?

These were among the questions asked Sunday evening at the Prayer Center of Orland Park during a town hall meeting on what many are calling "the Lowes incident." The event was held in commemoration of the anniversary of the birth of Martin Luther King, Jr.

The town hall meeting was organized by several active and concerned interfaith groups that serve the residents of Illinois. The purpose was to have a detailed and evaluative community discussion regarding the "Lowes incident."

Specifically, Lowes headquarters decided to pull sponsorship from a TLC reality drama "All American Muslim," considering the show a "lightening rod" for its customers.

Many members of the media, several members of Congress and other high profile personalities considered the decision inappropriate as the show educated main-stream non-Muslim Americans about the daily lives of regular patriotic Muslim Americans, according to the sponsors of the town hall. The decision to pull advertising from the show was seen as a step catering to fear and hysteria perpetuated by the self-titled group, The Florida Family Association.

According to the FFA’s Web site, " Florida Family Association urged advertisers to stop supporting The Learning Channel’s new show All-American Muslim because it appeared to be propaganda designed to counter legitimate and present-day concerns about many Muslims who are advancing Islamic fundamentalism and Sharia law. The show profiled only Muslims that appeared to be ordinary folks while excluding many Islamic believers whose agenda poses a clear and present danger to liberties and traditional values that the majority of Americans cherish." The group claims supporters sent a total of 1,184,447 emails to advertisers, but there are no source citations on the FFA’s Web site for any of their claims.

Opening remarks at the forum Sunday were delivered by moderator Attorney Maarian Mozaffar, "There is a show called ‘All American Muslim’ that basically portrays Muslim Americans as regular Americans."

Mozaffar noted that characters on the show represented conservative and liberal members of the Muslim faith, "Every reality show on the TLC is really predicated on the premise that it is to educate. Every media show needs sponsorship because we don’t have millionaires and billionaires with great ideas."

TLC had a number of sponsors, including Lowes. FFA contacted many of the sponsors and said, "You showed Muslim Americans as normal, and that’s a problem. That’s deceiving the American people." Mozaffar said. She said the FFA claimed that all Muslim Americans have a hidden agenda, which the show did not portray.

In response, Lowes, a Fortune 500 company, withdrew sponsorship from the show. 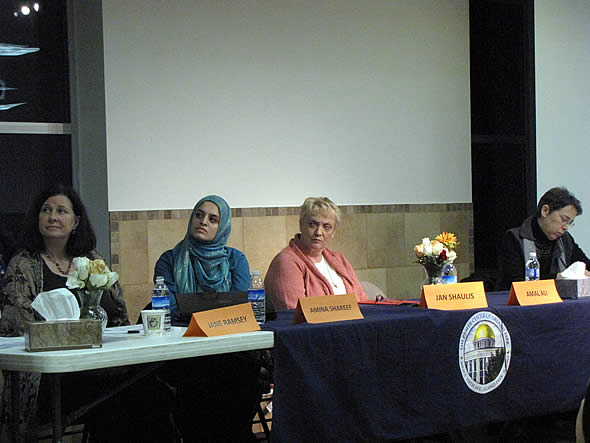 Why was this important for Muslims? "This was the first reality show portraying Muslims," Mozaffar said.

Jane Ramsey, a member of the Jewish faith, spoke next, reassuring those in attendance, "Injustice anywhere is a threat to justice everywhere," she said, quoting Dr. Martin Luther King Jr. "The Jewish Council on Urban Affairs stands strong here today with you, stating loudly and clearly, that the outrage felt my Muslims, and by all people of good will, regarding Lowes’ shameful actions, reflects our outrage as well. Lowes’ cowardice in buckling to the right-wing Florida Family Association’s demand that it pull its ads from the reality show ‘All American Muslim,’ and Lowes’ subsequent justifications for these acts, are deeply offensive and attack the very core of our democracy."

There were numerous references to Dr. King throughout the evening. There were several denunciations of the actions of the Lowes headquarters.

Most speakers agreed on a boycott of Lowes, with the exception of one. Anya Cordell argued for a more creative approach than a boycott, perhaps asking people in disagreement with Lowes’ actions might make a small purchase and remind the manager at whatever store that they were there as Muslims, Christians or Jews who disagreed with the decision of Lowes.

Spending the first part of her remarks citing her accolades and Web sites that published some of her articles, Cordell said, "We have to create relationships. Yelling at people or adminishments, and I respectfully differ from you here [to one of the other panelists], the idea of a boycott didn’t really gel with the personalities of the people that I knew."

Other panelists noted that they did not recommend yelling at protests.

Amina Shareef, representing CAIR, the Council on American Islamic Relations, said, "Those groups like the Florida Family Association that stir up these controversies, they are the fringe, and we just need to make sure we work with main-stream Americans, the majority of Americans, level-headed, peaceful, tolerant people, to fulfill our nation’s values."

"I don’t feel pessimistic about the future," Shareef said.

Jan Shaulis, a member of the Southwest Interfaith Team, spoke for herself as a Christian. "It is very strange to me where people develop this hatred, and what I have seen, it is ignorance. It is truly ignorance."

Shaulis noted that Orland Park, a "long, long time ago" was Catholics and Protestants. When a Catholic family moved in, the Ku Klux Klan burnt a cross on their land.

"In SWIFT, the Southwest Interfaith Team, we have a tendency of sitting down and eating together, where Christians, and Muslims, and Jews, we share food. We always make sure it meets dietary restrictions. We’re good that way.

"We talk. We go and work at Habitat for Humanity. And the thing that I’ve found out, we’re all alike. We have kids who go to the same schools. We have kids who play on the same sports teams. And some of us even take the same train to Chicago to work at the same place. Gee how strange that is."

The majority of the speakers called for a boycott of Lowes.

The majority of the town hall meeting appears below: