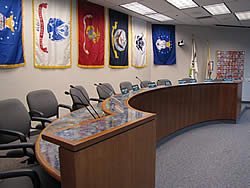 The Village Board is scheduled to meet with the Board of Education of School District 163 Monday at 6:30 p.m. in Village Hall. (Photo: ENEWSPF)

The Village Board will meet jointly with the School Board for School District 163 on Monday, August 24, 2009 at 6:30 p.m. in the Board Room of Village Hall. The purpose of this meeting will be for the Village to move forward on one of its goals for the current fiscal year by developing methods for improving Board and Staff relations with School District 163. Residents are always welcome to attend.

The Village is currently accepting applications for a recruitment process to establish a new-hire eligibility list for the position of Public Works Maintenance Worker. More information on this process is available at the “Employment” link on the Village web site, www.villageofparkforest.com. Applications for employment are also available in the Village Manager’s Office in Village Hall. Application deadline is Friday, September 4.

The Village of Park Forest will be conducting surveys during August and September to obtain feedback from residents on their satisfaction with Village services and communication efforts.

Village staff will have tables set up at CVS Pharmacy, Walgreens, Stop & Shop, and 7-11, where Park Forest residents can complete the short questionnaire in exchange for a gift card. A valid driver’s license or state identification card proving Park Forest residency is required for participation in the in-person surveys.

The survey will also be mailed to a random sample of 500 residents. Those who complete the survey and mail it back prior to September 4th will be entered into a drawing for one of several giveaways such as: Village sticker, Aqua Center passes, Freedom Hall passes, and much more.

By making your voice heard, you allow the Village an opportunity to identify ways to better serve you. Residents with questions regarding the community survey can call Village Hall at 708-283-5624.

The Village continued its deliberations with CN this week related to noise mitigation and other issues associated with the rail company’s January 2009 purchase of the former EJ&E rail system. The Village anticipates public discussion of negotiations with CN to take place with the Village Board’s September meeting schedule. Residents with questions about CN and the ongoing negotiations can contact the Village Manager’s Office of Village Hall at 708-748-1129.

Residents interested in getting involved with the local government decision-making process can volunteer to serve on any number of Boards or Commissions in Park Forest. These volunteer opportunities allow residents to give important citizen input on any number of issues related to establishing policies and/or the day-to-day operation of Village governance.

Residents seeking more information on how to become more involved on a Board/Commission can seek an application on the Village web site or call Village Hall at 708-283-5605.

Volunteer Boards/Commissions include the following:

In new construction/building permit activity in the first 14 days of August, 38 permits have been recorded. Over the past 5 years, the month of August has averaged 67 permits being issued. At the current pace, 84 building permits could be issued this month. In August 2008, a total of 74 building permits were recorded.

In Civil Court action on property maintenance code enforcement matters, 145 Blackhawk was back in court for a status hearing. Meanwhile 5 cases were scheduled in the Adjudication Hearing Process.

The Village’s first Wine & Chocolate Tasting was a rousing success. 109 attendees from 15 communities spanning Illinois and Indiana participated in the festivities at Tall Grass Arts Gallery and the Foyer of Illinois Theatre Center (ITC). The attendees enjoyed fine Gayete’s chocolates (Lansing, Illinois-based chocolate maker) compliments of Calvary United Protestant Church (Park Forest); wine donated by Abbruzzi Distributors (Chicago Heights) and jazz music played by a trio. Local vendors who were featured included: Tastefully Simple and the Pampered Chef. Design’d to Go Florist (Park Forest) provided the flowers. It was the first time that many of the attendees had visited either Tall Grass Gallery or ITC. Kudos to the new Park Forest Ambassadors for volunteering to staff the event.

Career division training was focused in two separate areas. Members practiced basic ropes and knots skills, which included making up basic knots and creating mechanical advantage systems with ropes, pulleys and other hardware. The second topic had members working with supplied-air-breathing apparatus (SABA). Similar to the self-contained-breathing-apparatus (SCBA), these units are used in confined areas for rescue, search and hazardous materials operations. The system consists of a number of parts providing options on how the system will be supplied with air. This type of training practices skills in the breathing apparatus arena and the rescue arena.

Members of the Paid-On-Call division worked on combining skills in the areas of hoses and ladders. Their drill focused on advancing charged and uncharged hose lines up and down ladders as could be necessary in fire situations.

Chief Bob Wilcox and Deputy Chief Bruce Ziegle attended the monthly WILCO Fire Chief’s meeting this week in Peotone. This meeting brings the regions fire departments together in a number of cooperative ways to better the service provided in each community. Topics range from training to dive team operation and provide an opportunity for departments of all sizes to get involved in assisting their neighbors.

Deputy Chief Ziegle attended a legislative forum for State Senators and Representatives from Will County in Frankfort last week. Legislators and fire officials shared their opinions and knowledge on issues affecting fire departments in the State of Illinois.

The next landlord’s training class for Crime Free Housing will be held on Saturday, September 26. The class will begin at 9 a.m. at Dining on the Green.

Records Clerk Christy Colye is dong well after giving birth on July 23 to her son, Tylen Coyle. Mom and baby are doing fine. Christy will be returning to work soon.

Condolences are extended to PAAC Supervisor Stacy Wolf on the passing of her mother, Judy Wolf this week. Stacy and her family are in our thoughts and prayers.

The Citizens’ Police and Fire Academy participants will begin ride-alongs with the Police Department this week as part of their training.

Corporal Rich Oldenburg is currently updating the evidence room’s inventory system. Property will now be scanned into evidence instead of using the old paper method.

The bid opening took place on Monday, August 17 for the Legacy Square and Schoolhouse Manor Pavement Rehabilitation and Surfacing. Five bids were received and the low bidder was K-Five Construction of Lemont, Illinois.

The Orchard Drive from Sauk Trail to Indianwood watermain replacement project started on Monday, August 17. Orchard Drive is open to one way traffic northbound. Southbound traffic is being redirected.

An open house for public comment on Phase 1 Preliminary Design of Orchard Drive between Sauk Trail and U.S. Route 30 (Lincoln Highway) was recently held. The public provided comments and suggestions on this project.

Letters were mailed to residents that will be affected by the smoke testing that will take place from Monday, August 24 through Monday, August 31. Areas include parts of West Lincolnwood, Industrial Park, and the north section of the “W” streets. If residents did not receive a letter they will not be affected. The smoke is non-toxic, leaves no residue and should not enter homes unless a floor drain or bathroom fixture trap becomes dry due to lack of use. Pouring one-half gallon of water reduces this risk.

Watermain breaks were repaired at 351 Oswego, 339-341 Homan and across from 3 Brookside. A storm sewer inlet was completely rebuilt at Rich Ct. and Westwood. B-boxes and roundways were replaced or repaired at 23 Woodland Glen and 342 Minocqua. Street lights were relamped and shorts repaired.

The signed detail construction plans for the bathhouse project were issued last week. Plans are under review by the Building Department for Permits and other approvals. A pre-bid meeting was held at the pool last week. Prospective bidders were on hand to learn about the project and do a walk-through of the site. Bids will be received and read aloud on Thursday, August 27 at 11 a.m. in the Board Room at Village Hall. Staff and consultants continue to explore opportunities for solar water heating, various skylight models and other “green initiatives.” Staff met with a moving company last week to discuss some storage containers to hold contents of the bathhouse and old concession building during construction.

Activities are heating up for the Labor Day Scenic 5 and More. Volunteers are still needed at several locations on race morning. If you wish to volunteer, call Phyllis at Recreation & Parks at 708-748-2005. Packet pickup this year will be under the canopy at Coy’s Detail shop on Orchard. The Start and Finish lines of the 5 Mile Run and the Bike Ride will be in the same locations on Orchard and the 5K walk around the wetlands will return. Kids Races will start and finish at the pool on Orchard Dr. This year all awards, music and post-race activities will take place inside the Aqua Center and be combined with the lap swim and a number of other fun aquatic activities.

The contractor hired by the Thorn Creek Management Commission removed sections of exterior siding and replaced several lineal feet of structural timbers under the southeast corner of the building last week. Siding has now been replaced and painted and that section of the building looks great. Cosmetic repairs at several locations inside the building are also scheduled to be addressed in the next month or so. The remaining major project is the re-roofing of the 140+ year old building. Park Forest has partial funding budgeted and the Commission is attempting to find the needed additional funds.

Installation of the new theater seating has been confirmed to begin on Monday, August 31.