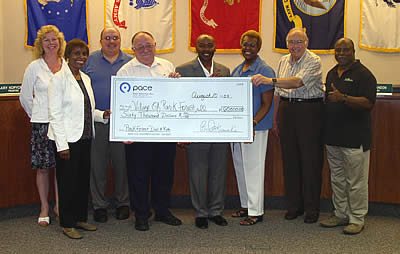 Phoenix Mayor Terry R. Wells (center), a member of the Board of Directors of Pace, presents Park Forest with a check for $60,000 to the Village of Park Forest from Pace for the Jolly Trolley. “We have a great relationship with Park Forest,” Mayor Wells said, “and PACE would like to thank you for your ongoing commitment to public transportation, especially during these tough economic times.” (PHOTO: ENEWSPF)

The Village is currently accepting applications for a recruitment process to establish a new-hire eligibility list for the position of Public Works Maintenance Worker. More information on this process is available at the “Employment” link on the Village web site, www.villageofparkforest.com. Applications for employment are also available at the Customer Service Counter or in the Village Manager’s Office on the second floor of Village Hall.

On Wednesday, August 26, the Cable commission held their regular quarterly meeting. Comcast Cable and AT&T U-verse updates were provided. In addition, the next phase of Local Origination Programming equipment was discussed.

On Wednesday, August 26, the Housing Choice Voucher Program opened its waitlist for the first time since 1999. Because of the limited number of vouchers that HUD has allocated to the agency, only 250 applications are available to form a lottery pool. Fifty (50) of these applications will be randomly selected for the waitlist. Applications were only available and accepted during that day. It should be noted that this was a one day event. A special thank you to the Police Department for all of their help in assisting during the application process. For additional information, contact the Housing Authority at 708-503-7734.

The Village received seven proposals from sign contractors to replace the existing sign at US 30 and Orchard Drive. Staff has selected two proposals to investigate further. The new sign will provide an electronic message board, at least four sign panels for Village businesses, and a Village logo display. After the Village Board review and approval, the goal is to complete construction of the new sign this calendar year.

The Village is sad to report that Orchard Fresh Market has closed. The property owner is working to determine how and whether to proceed with a search for a new grocery operator.

Career division shifts continued to focus training efforts on basic rope and knot skills for the 1st arriving company including making basic knots and creating mechanical-advantage systems with ropes, pulleys and other hardware. These skills can be used in a variety of areas, but are most useful in rescue operations.

Career members also worked with the tri-pod and related equipment for the removal of persons from various confined space areas. With the addition of a rope-haul system, the tri-pod allows victims and personnel to be raised and lowered vertical nature.

Both divisions were scheduled to combine with automatic aid companies on August 21 to participate in a live-fire exercise at the training site. NFPA standard 1403 requires a minimum number of 14 participants to be on hand for any live-burn type activity. In order to have sufficient personnel available to run calls during this activity, the Department must have a minimum of 18 people present to perform this task. Unfortunately, due to limited participation from the POC division and automatic aid companies, there were not enough participants. Career members had the POC members in attendance complete the ropes, knots and systems drill instead.

On August 20, Deputy Chief Bruce Ziegle attended an activity jointly sponsored by the Frankfort Fire District and the ParaTech Corporation. Fire departments and various political entities were invited to tour the Frankfort training facility and the ParaTech training facility. In addition, there was a discussion of the status of fire-related grant programs available at the state and federal level. The only elected official to attend was U.S. Representative Debbie Halverson.

Chief Thomas Fleming attended the Cook County Department of Health’s meeting for the South Suburban Chiefs of Police to discuss the County’s vaccination plan regarding the H1N1 problem.

The participants of the Community Service program passed out flyers to the residents who live on the Scenic 5’s course. The flyers are requesting the residents park their cars off the street to allow the runners a clear course to run. Volunteers are still needed to help with the race.

Community Service Officer James Jachymiak donated his time to help deliver the food for senior citizens at Juniper Towers. The food was distributed by the Rich Township Council on Aging.

The Orchard Drive watermain replacement project from Sauk Trail to Indianwood, is continuing. Orchard Drive is open to one-way traffic northbound. Southbound traffic is being redirected. The project is scheduled for completion in early December 2009.

Smoke testing began on August 24 and will continue through Monday, August 31. Areas include parts of West Lincolnwood, Industrial Park, and the north section of the “W” streets. If residents did not receive a letter, they will not be affected. The smoke is non-toxic, leaves no residue and should not enter homes unless a floor drain or bathroom fixture trap becomes dry due to lack of use. Pouring one-half gallon of water reduces this risk. The purpose of this testing is to check for illegal or cross connections to the sanitary sewer. With the finding of any of these and the correction of them will reduce inflow and infiltration (I & I) of storm water into the sanitary system, helping meet the I & I limits set by Thorn Creek Basin Sanitary District.

The concrete foundation and floor for the Illinois Lincoln Highway National Scenic Byway Interpretive Gazebo was completed this week. It is located along Lincoln Highway between the former car dealer and the parking lot.

Watermain breaks were repaired at 221 Arrowhead, 121 Nauvoo, and 333 Merrimac. Street lights were relamped and sanitary sewers were cleaned. Three 2″ valves were repaired at Court H-1 on Western Avenue, 274 Juniper and 1 Hemlock. The B-box was replaced at 45 Sauk Trail.

Contractor, Lane Western, closed off well #7 in accordance with the IEPA regulations. This item was included with the well #6 maintenance.

Stewart Spreading, this year’s contractor for lime sludge removal, is required to remove 4,000 dry tons of sludge from the lime lagoon. They started hauling out the sludge this week.

Bids were received and read aloud on August 27 at 11 a.m. in the Board Room at Village Hall. Over 20 prospective bidders attended a pre-bid meeting and walk-through of the facility recently. Since that time many others have contacted the Village about the project, so the hope is that bidding will be spirited. Staff and consultants continue to explore opportunities for solar water heating, various skylight models and other “green initiatives.” Members of the parks staff have already begun to remove some of the contents of the bathhouse and old concession building to clear them for the work. The Village custodial warehouse operation, sign shop and more general storage space have also occupied the bathhouse building for many years. A storage POD container will be placed in the parking lot after Labor Day to take some of the equipment needing to be moved.

The staff at ME4E environmental consultants, using the Central Park Wetlands for school groups, conducted a practice 2.5K walk around the wetland site recently. The walk was for participants to prepare for the 5K Wetlands walk on Labor Day at the same location. In addition to the walk, “exploration stations” will be scattered along the route where participants will be able to learn more about the value of the wetlands.

Activities are heating up for the Labor Day Scenic 5 and More. Volunteers are still needed at several locations on race morning so call Phyllis at Recreation & Parks at 708-748-2005 if you can help. Packet pickup this year will be under the canopy at Coy’s Detail Shop on Orchard Drive. The start and finish lines of the 5 Mile Run and the Bike Ride will be in the same locations on Orchard Drive and the 5K walk around the wetlands will return. Kids races will start and finish at the pool on Orchard Drive. New this year is that all awards, music and post-race activities will take place inside the Aqua Center and be combined with the lap swim and a number of other fun aquatic activities. Stephanie Rodas from the Finance Department has been fantastic help to get word out to residents along the route through letters mailed and flyers to be distributed this week. Jason Miller has also done great work with posters around the community and a postcard to be mailed to all residents soon. Race registration is now over 200 and last year the Village received 200 in the final week alone. So it is hopeful that the numbers will be close to the same as 2008.

A swing set was removed from Illinois Park in the last week for safety reasons. Denyse Carreas, John Joyce and Rob Gunther recently met with the Village’s IRMA representative to discuss the playground equipment inspection conducted earlier in the spring. Several pieces of equipment installed in the late 1960’s and early 1970’s have been kept in the parks because they are serviceable, not heavily used and never been the subject of an accident or injury. They do not however, meet current product safety standards for commercial play equipment. Therefore, our Risk Managers feel they should be removed because in the case of an accident, they present undue liability exposure to the Village. Residents throughout the Village may see several pieces of equipment removed from park playgrounds during the next few weeks.