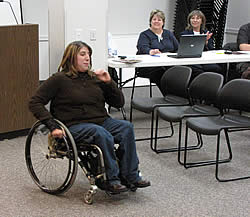 Kelly Elliott, Park Forest, a Special Education Teacher, Crete-Monee School District 201U, was recognized at last Monday’s Village Board meeting. Kelly was named one of the Outstanding Young People by the Illinois Jaycees. (Photo: ENEWSPF)

The next meeting of the Village Board is scheduled for Monday, October 26 at 8 p.m. at Village Hall. Residents are encouraged to attend.

To view previously held Board Meetings, visit the Village’s Web site at: http://www.villageofparkforest.com and click on the date of the meeting you wish to watch.

The Village Board established trick-or-treating hours at the October 12th Board Meeting. Ghosts, goblins and ghouls can go door-to-door in search of candy between the hours of 2 p.m. and 6 p.m. on Saturday, October 31. Motorists are asked to use extra caution to look out for children crossing the street.

The Village of Park Forest is currently accepting resumes/applications for the position of Director of Public Health. For more details, visit the Village Web site at www.villageofparkforest.com and click on the ‘employment’ link.

The Village of Park Forest closed on the voluntary mitigation agreement (VMA) with CN railroad company last week. As previously reported, in response to the Surface Transportation Board’s (STB) environmental impact analysis for the CN acquisition, Village Officials previously submitted numerous points of protest on behalf of Park Forest and the perceived impacts to the community prior to the sale. Objections to the sale did not result in any altering of the transaction between the two rail companies. The STB granted approval of the sale on January 31, 2009.

Prior to the transaction being finalized, CN approached the Village with interest in purchasing a parcel of Village-owned land. The land, located within close proximity of the commuter lot at Hickory Street and Homan Avenue (including a small portion of the commuter lot itself), would allow CN to construct a rail switch from the east/west bound EJ&E lines to the north/south CN bound rails.

The deal between the Village and CN includes six agreements, including:

Through the sale of 5.778 acres of land to CN, the deal helps mitigate Village concerns with the rail company’s acquisition of the former EJ&E infrastructure and its impacts on the Village. It also provides funds which will be used to help offset property value impacts for residents.

The deal, totaling more than $7.3 million dollars, just might be the largest in Park Forest’s 60 year history. Park Forest will maintain 80% of the revenue stream for the Homan/Hickory commuter parking lot, which will be repaved and will also feature new lighting and fencing. Additionally, monies have been contributed to further emergency response operations, training and equipment as well as Park Forest economic development efforts. The package also provides funds for a public attraction vision which will include construction of a train-viewing platform, rail-car feature and large-scale mural which may draw latent tourism benefits to Park Forest and the Old Plank Road Trail. Finally, the deal facilitates the transfer of bridge/overpass ownership over Orchard Drive to CN and the rail company will paint the structure in the near future.

Work on implementation of the CN rail switch will begin in calendar year 2009 with rail engineering and construction crews expected on site in the coming weeks. The majority of the commuter lot reconfiguration and overhauls are expected to be complete before the end of 2009. The rail connection could be complete by the end of 2010. As rail construction unfolds, the public park (complete with an actual rail caboose), a viewing platform and interpretive rail history signage, will be constructed and should be in place by late-2010. A program is currently being drafted by Village officials which would facilitate settlement funding being passed on to those residential properties in Park Forest which abut the rail line.

Periodic updates on rail and commuter lot construction, noise mitigation, rail park development and other associated items will be posted on the Village’s Web site: www.villageofparkforest.com. Questions regarding the agreement can be made to the Village Manager’s Office at 708-748-1129.

SouthCom Board of Directors Meeting

Village Manager Tom Mick, Police Chief Tom Fleming and Finance Director Mary Dankowski attended a Board of Directors meeting for the SouthCom joint dispatching agency on October 12. The agenda included a discussion of personnel matters and an update on the transition of police radio communications.

In February 2007, the Village embarked upon a project to allow residents to pay their utility bills online via the Web site. This past month, Finance Department staff processed the 10,000th transaction via this service that is offered at no charge. For information on this service, visit the Village Web site at: www.villageofparkforest.com.

In new construction/building permit activity in the first 13 days of October, 39 permits have been recorded. Over the past 5 years, the month of October has averaged 72 permits being issued. At the current pace, 93 building permits could be issued this month. In October 2008, a total of 78 building permits were recorded.

In Civil Court action on property maintenance code enforcement matter, the Atlantic Associates/Thorncreek matter was back before the Court for a status hearing.

On October 14, Sandra Zoellner attended the meting of the Cook County Board’s Finance Tax Delinquency Subcommittee. At this meeting, the Subcommittee reviewed all municipal requests for the No Cash Bid Program 2009 Scavenger Sale. Subcommittee approval of the Village’s request is the first step to approval by the full County Board prior to the scavenger sale, which is expected to be held by the end of the calendar year.

On the evening of October 13, the fire department responded to Monee Road near Tampa Street for the report of a large anti-freeze spill. Personnel were met by a forest preserve police officer who indicated they had received reports of the creek being an odd green color. Indeed the creek was the most brilliant shade of green from Monee Road at Tampa Street, past the bridge at Thorn Creek Drive. An investigation determined the Village engineers had opened a hydrant and added a bio-degradable dye to the water in order to track the flow of certain storm drains.

Annual pump service tests are being conducted this week after being delayed due to drainage work at the training site. Annual testing of the pumps is a requirement and assures pumps are in good working order and can pump at their rated capacity. Many departments must go off-site to accomplish this task, but Park Forest can conduct these tests at the fire training site.

Shifts are also performing their annual driver’s evaluation as recommended by the Intergovernmental Risk Management Association (IRMA), the Village’s insurance carrier. This week, members have been completing their evaluation in the engine and next week they will perform the same evaluation in the ambulance.

Members of the Career Division also participated in a combined training session with personnel from the Water Department and the Department of Public Works. The training was held in the fire training room and personnel received training in electrical safety and lock-out/tag-out rules, regulations and practices. Two more sessions will be held later this month to cover all three fire department shifts and involve the remaining crew members from Water and Public Works Departments.

Shift members made school visits last week as part of Fire Prevention Week activities. Visits were made to St. Mary’s Pre-K and kindergarten classes as well as to the children at Aunt Martha’s Head Start on Western Avenue. Children received fire safety tips, were able to look at the apparatus and got to watch one of the firefighters dress in turn-out gear.

Captain Wheeler also made a number of school visits during Fire Prevention Week. Fire safety classes were taught at Indiana School and children at Algonquin School and Arcadia Schools were treated to demonstrations in the department’s Fire Safety Trailer.

The contractor for the Orchard Drive watermain replacement project has completed the work on the watermain and is continuing with the concrete and asphalt restoration. Orchard Drive will continue to be open to one-way traffic northbound. Southbound traffic is being redirected during restoration.

Elmund & Nelson began the second phase of the Indianwood Boulevard street lighting project. This project starts on Blackhawk Drive and continues to Monee Road. Currently, they are erecting the street light poles. Once this street lighting work is done, this will complete the grant.

Chuck’s Concrete began concrete restoration work that resulted from watermain breaks that have occurred during the past year.

Staff continues working with Sprint/Nextel to improve the quality of the phones and reduce the monthly bill.

Sunset Sewer and Water of Monee completed the temporary repair to the interior of the 54” corrugated pipe along Forest Boulevard near Court J-18 across from 151 Forest Boulevard.

Quotes were requested from contractors for asphalt restoration due to watermain breaks. Quotes were due to the Public Works Department on October 14.

This week, street lights were relamped/repaired and street light shorts were repaired. Sanitary sewers were cleaned Village-wide. A watermain break was repaired at 449 Springfield. Asphalt patching is being done as weather and product availability allows.

This week the water plant staff has concentrated on winterizing equipment and buildings.

The Midwest Wings Fall Classic Soccer Tournament took place in Central Park last weekend. Nearly 60 youth teams from all over the Midwest visited Park Forest for the weekend. A total of five fields of varying sizes were set up in the park. Members of the parks staff moved bleachers around to accommodate the fields. Following the event, staff completed quite a clean-up job.

The on-site construction supervisor set up his office last week and will be there until the work is completed. Plumbing and electrical demolition was underway last Monday and by Tuesday, several interior walls were coming down in the bathhouse. The demolition contractor is delivering a large piece of equipment to the site this week which means the old concession building will be coming down soon.