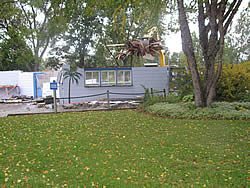 Farewell to the Snack Shack at the Park Forest Aqua Center. Demolition has begun as major renovations to one of the Village’s feature amenities. See more pictures and be part of the discussion on Facebook. (Photo: VOPF)

The next meeting of the Village Board is scheduled for Monday, October 26 at 8 p.m. at Village Hall. Residents are encouraged to attend.

To view previously held Board Meetings, visit the Village’s web site at: http://www.villageofparkforest.com/index.php?src=gendocs&ref=BoardMtgArchive&category=Village%20Government and click on the date of the meeting you wish to watch.

Concrete patching on Lincoln Highway (U.S. Route 30) begins on Monday, October 26. Drivers should allow for extra time and use alternative routes when traveling along a 3.5 mile stretch of Lincoln Highway. It is anticipated that the work will be completed in approximately 5 weeks, weather permitting. Drivers are advised of the following:

During construction there will be permanent lane closures in both directions of Lincoln Highway (U.S. 30) from Cicero Avenue in Matteson to a quarter-mile east of Western Avenue in Chicago Heights.

All work is expected to be completed by early December 2009.

The Board of Trustees will convene a goal-setting session at 8:30 a.m. on Saturday, October 31, in the Board Room at Village Hall as it sets a vision for the 2010-2011 Fiscal Year. The session will be facilitated by Paul Craig and will include the Village re-visiting the goals for the current fiscal year and assessing how these goals might be adjusted for the year ahead. Residents are welcome to attend. Residents with questions regarding the Village’s strategic planning process can call the Village Manager’s Officer at 708-748-1129.

Director of Recreations and Parks John Joyce, Police Chief Tom Fleming and Village Manager Tom Mick attended the School District 227 Superintendent Search Forum last week. The Village attended at the invitation of the School District and provided comments on a series of questions posed by the session facilitators.

Village Manager Tom Mick attended the monthly Business Meeting for the SSMMA last week. Among the items discussed were the construction projects through the Surface Transportation Program and an update on legislation pending in the State Capitol.

In federal court action, the Atlantic Associates/Thorncreek matter was back before the Court for requests in modification of previous orders.

Six cases were scheduled in the Adjudication Hearing Process.

Commander Chris Mannino recently attended a three-day conference on pension issues for pension board members. The conference was held at Lake Geneva, Wisconsin.

The contractor for the Orchard Drive watermain replacement project has completed the restoration work and has opened up the road to normal traffic patterns last week. All that remains is for the contractor to finish cleanup and perform remedial work.

Elmund & Nelson has finished installing the street lights along Indianwood from Blackhawk to Monee Road. The contractor is waiting for ComEd to change the power over to the new controller before they can complete the project.

Chuck’s Concrete finished concrete restoration last week from watermain breaks that have occurred during the past year.

All Pro Paving was the low bidder for asphalt restoration work where watermain breaks have occurred during the past year. The work will begin soon.

Congratulations to Supervisor Anna Soloff, Carolyn Hoff, Administrative Assistant and Park Forest’s own Mr. Chess, Gene Finley on a very successful first Park Forest Chess Challenge Tournament held on October 17. Over twenty participants were on hand ranging from sixth to seventh grade, to adult master level players. The challenge was organized by the Recreation and Parks Chess Program an affiliate of the U.S. Chess Federation, and organizers see this developing into a major event for the Village in the future. Participants came from Homewood, Flossmoor, Tinley Park and Chicago in addition to Park Forest.

Work is progressing quickly at the site under the direction of construction manager, W. B. Olson. Interior demolition in the west end of the bathhouse was completed last week, and demolition in the east end has begun. The old concession building, erected as a bathhouse in 1954, became history in little more than eight hours. The demolition contractor was meticulous in separating lumber, from cement block, from steel, from concrete slabs and other materials as the building was removed from the site with the maximum of recycling. Only one incident marred the day, as it was discovered that the AT&T phone lines to the Library went through the old concession stand. During demolition around the foundation, phone service at the Library was knocked out, even though AT&T had signed-off on the building through the JULIE process. A late afternoon splice of lines on Orchard Drive next to the bathhouse restored the service to the Library. After the remodeling, the new service to the bathhouse will be hooked up directly from the main line on Orchard Drive. This week, demolition continues in the east end of the building as well as the removal of windows, doors and frames.

There’s more on Facebook: Visit the Park Forest Aqua Center on Facebook. Join the discussions as residents present and former talk about the changes at the Aqua Center.