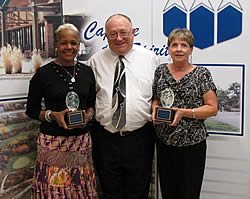 Earlier this week, the annual inspection of Garden House Apartments was performed. Inspections of the entire building and ground, including each individual unit, are a required part of the Village’s agreement with HUD. Inspection results indicate that the property continues to be maintained in good condition. An inspection report is being prepared for Garden House Management.

In Civil Court action on property maintenance code enforcement matters, Building Number 3 (By Us Construction) was up for a status hearing.

Career division members focused training efforts on preparation for next week’s continuing education examination. The last of three continuing education sessions for the year, this one is focusing on the recognition and treatment of victims of poisoning and weapons of mass destruction. For each session paramedics complete a reading assignment and the required study booklet and must then complete an examination with a score of not less than 80%. The Paid-On-Call division combined training from previous drill sessions into an exercise called a court run. In this activity the members simulate a response focusing on the skills in question. This past drill focused on self-contained breathing apparatus; search and rescue; advancing attack lines and using ladders as a rescue aid.

On Friday, September 18 both divisions combined their training with members of the Richton Park and University Park Fire Departments in a live fire exercise. These types of drills allow the departments to work together on simulations prior to having to interact on an actual fire scene. Combined training is held monthly and involves at least two divisions.

The crew is mourning the loss of Bob Kiser, the former superintendent, who recently passed away. He will be greatly missed as a co-worker and friend by all.

On September 16, staff members held a pre-construction meeting with Cricket Wireless and the engineering consultant, SHE, who reviewed the Cricket plans to install antennas on the Blackhawk Drive water tower. Construction is expected to begin September 21.

The storm sewer repairs at Westwood Drive and Rich Court were completed. Watermain breaks were repaired at 251 Lester Road and on Westwood Drive. Sanitary sewers were cleaned and street lights were relamped Village-wide.

Routine bacterial samples were taken and sent to the lab. Stewart Spreading continues hauling out the sludge at the lime lagoon.

A large storage POD was delivered to the parking lot last week to store contents of the bathhouse and the old concession stand while the remodeling work is going on. If all goes well, construction is scheduled to begin within the next two weeks. Very good news was received recently in the form of the letter from the State of Illinois Department of Public Health reporting that they had approved the plans for the bathhouse remodeling.

It seems impossible that the 2009 Season has come to a close. Several staff members are sill around to help with clearing out the bathhouse and putting other equipment away for the winter.

While the numbers were down somewhat for the 2009 Scenic Five & More, the day was beautiful, the winning times were very fast and the post race festivities, inside the pool area, were a huge success. Thanks again to Village staff including the pool staff and of course to Police, Fire, Public Works and other Departments in Village Hall who pitched in to help make this another successful event.

Congratulations to Chuck Sabey upon receipt of a letter from the Illinois Arts Council (IAC) announcing an IAC Presenters Grant in the amount of $2,960. While this is $2,000 less than the prior year, with the State’s finances what they are, Freedom Hall was bracing for a possible shutout.

The installation of the new theater seats continues and is scheduled to be completed by the weekend. A new concrete ADA ramp has been installed outside the east emergency exit door from the Theater. This emergency ramp was a requirement of the theater seat replacement project.