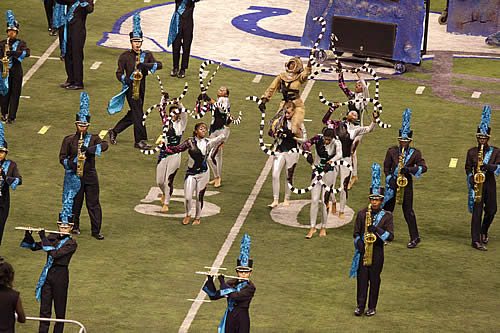 Members of the Marian Catholic Band perform in front of nearly 26,000 fans while competing at the Grand National Competition in Indianapolis. The Spartans finished 10th overall. (PHOTO SUPPLIED)

Park Forest, IL—(ENEWSPF)— The Marian Catholic High School Marching Band, one of only 12 schools in the nation to reach the finals of the Bands of America Grand Nationals this weekend, captured 10th Place overall with an 87.45 score on Nov. 15 at the Lucas Oil Dome in Indianapolis. More than 25,000 fans were onhand for the finals after the competitors were narrowed down from 96 starting on Wednesday.

The band’s show this year was entitled Rapture of the Deep. The show tells the story of deep sea divers who get to the bottom of the ocean and meet strange creatures who eventually help them reach the surface again. The show features the music of Nigel Clarke, John Mackey and Michael Giacchino.

British composer Nigel Clarke has expressed his excitement that the Marian Band is performing his piece Earthrise in their show. He has been actively following the bands progress this season through social media and congratulated the band on its success through his personal Facebook page.

Making its record 31st appearance in the BOA Grand Nationals (the longest streak by far), the Marian Band has won a record seven Grand National Championships, the last coming in 2000. The Spartan Band was the lone Catholic band among the 12 Finals qualifiers, as well as the lone representative from Illinois.