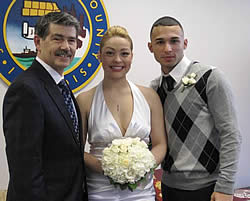 Clerk David Orr issued the 19-year-old couple the first marriage license of the year Saturday morning and then married them in his Chicago office, 69 W. Washington St.

On Sunday, Rodriguez returns to Camp Lejeune, North Carolina. Jannette will join the Marine lance corporal on base in February.

Rodriguez, of Chicago’s Logan Square community, is an Iraq war veteran who is scheduled for a tour in Afghanistan in 2011.

"It worries me," said Jannette, who wore a white satin dress. "I know it’s going to be tough, but I’m up for it."

Rodriguez proposed Dec. 26 while at a restaurant with their families. He got down on one knee after asking permission from her parents. "It just feels right," he said.

The couple met about a year ago through mutual friends. They talked as often as possible during Rodriguez’s 9-month tour in Iraq. Jannette, of Schererville, Ind., said she always answered his phone calls and counted the days until he came home.

Jannette and Jeremy planned to win the first marriage slot. Not wanting to take any chances, they lined up at 6 a.m. Three hours later they said their marriage vows, exchanged rings and kissed in front of about 10 friends and relatives. 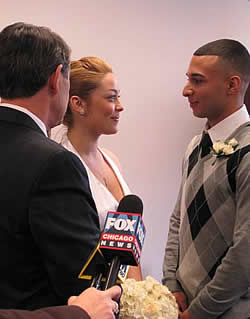 "I wish you a long, happy life together," Orr said at the end of the brief ceremony.

The Rodriguezes planned to celebrate Saturday night with a dinner party at a relative’s home.

Since 1991, Orr has married the couple who obtains the first marriage license of the year. The tradition includes showering the newlyweds with donated gifts.

This year’s prizes include a complementary weekend for two at the Palmer House Hilton; $100 gift certificate to Brasserie Jo, a Lettuce Entertain You restaurant; two tickets to the Goodman Theatre; and a bouquet and boutonniere provided by La Salle Flower Shop.