Ten-Year Development Expected to Transform South Side Community, Creating Tens of Thousands of Jobs and Generating Billions of Dollars of Investment 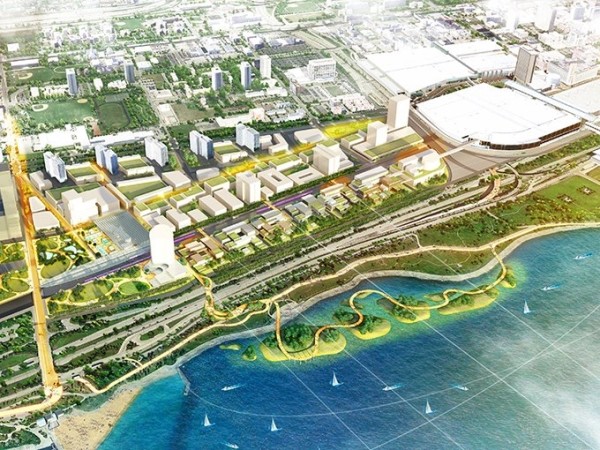 CHICAGO–(ENEWSPF)–June 2, 2017.  Mayor Rahm Emanuel today announced selection of a master development team to lead the revitalization of the Michael Reese site in Bronzeville. The team is led by Farpoint Development, Draper & Kramer, Chicago Neighborhood Initiatives, McLaurin Development Partners, and Bronzeville Community Development Partnership, among others. The consultant architect for the team is Skidmore Owings & Merrill. The 10-year project is expected to create up to approximately 36,000 temporary and permanent jobs.

“After sitting vacant for nearly a decade, today we are taking a major step towards the transformation and revitalization of the Michael Reese site,” Mayor Emanuel said. “Over the next 10 years this team will work with the community and the City to deliver a once-in-a-lifetime redevelopment that will generate economic opportunities and growth in Bronzeville and in neighborhoods throughout the city of Chicago.”

The initial phase may include a logistics center to accommodate McCormick Place truck traffic on multiple levels, potentially with new associated event, exhibit and/or meeting space. Planned later phases include more than 5 million square feet of technology-oriented commercial spaces, retail uses, homes and a hotel, depending on market demand.

“The team’s substantial development and design experience will ensure each development phase will maximize its benefits to the community and entire city, which is reflected in the long-term goal to assimilate the site with the lakefront, adjacent residential properties, and McCormick Place,” said David L. Reifman, commissioner of the Department of Planning and Development. “I look forward to moving forward with the process that will determine the scope and impact of this historic project.”

The Michael Reese Site is the former location of the Michael Reese Hospital and Medical Center at 2960 S. Ellis Ave. The hospital complex closed in 2008 and the City acquired the property in 2009.

“This is a great opportunity to continue needed economic development south of the McCormick Square campus,” Lori T. Healey, CEO of MPEA said. “We have selected a proven, talented and diverse development, finance and consulting team that can collaborate with us to fulfill the great potential of a vital part of Chicago.”

The selected bid includes an initial proposal of $144.45 million in compensation for the Reese site and the marshalling yards. The proposed payment terms will be considered and finalized as part of the formal redevelopment agreement, which will be subject to City Council and MPEA Board approval.

“Given the talent and experience of the team we’ve assembled, we’re confident that we can maximize the potential of the site to benefit not only the Bronzeville community, but the entire City of Chicago,” Scott Goodman, principal for Farpoint Development said.

The proposal also includes plans for a new park and Metra train station at 31st Street; new pedestrian connections to the lakefront; and a rebuilt Cottage Grove Avenue.