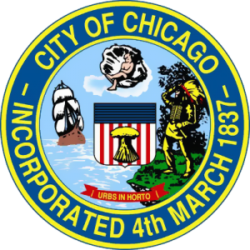 CHICAGO–(ENEWSPF)–April 18, 2017.l  Mayor Rahm Emanuel has announced the start of the 2017 paving season in Chicago. The Mayor was joined by crews from the Chicago Department of Transportation (CDOT) who helped kicked off the season by grinding streets in preparation for the asphalt paving that is scheduled to follow.

“Over the past five years we have repaved more than a third of Chicago’s roads and in the process, put nearly 7,000 people to work. But we are not stopping there,” said Mayor Emanuel. “We will continue investing in infrastructure improvements that will help us build a new Chicago and the foundation for our city’s future.”

Last year, the City repaved 266 miles of Chicago’s streets in coordination with private utility companies. This brings the total number of miles repaved under Building a New Chicago program to 1620.

“These improvements matter to residents and we are excited to get back to work on repaving streets,” CDOT Commissioner Rebekah Scheinfeld said. “We will also continue coordinating our efforts across city departments, and with private partners, to ensure these projects cause as little inconvenience as possible for residents.”

The 2017 repaving season will include work on both main arterials and residential streets. Some of the scheduled main arterial routes include:

Crews from CDOT will post “No Parking” signs up 24 to 48 hours before milling operations begin. The repaving will last between three to five days. The milling is then followed by street conditioning and finally the applying of asphalt.

Residents are encouraged to pay attention to all posted no parking streets signs to avoid being ticketed and towed.

The CDOT Project Coordination Office continues working with the City infrastructure departments and utilities to more efficiently manage projects like repaving and limit the impact they have on residents. These coordination efforts have led to $73 million in savings since 2012.