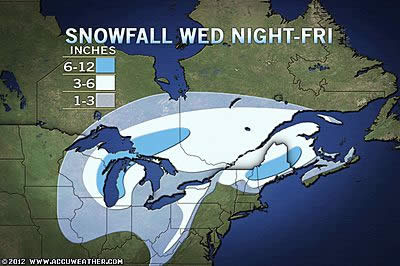 By Meghan Evans, Meteorologist for AccuWeather.com

An arctic cold front crossing the Midwest through Thursday will bring dramatic temperature drops. Following the record warmth on Tuesday, temperatures will be falling through the 20s in cities such as Chicago, Milwaukee and Madison by late Thursday with Thursday night lows dropping off into the teens. High winds will contribute to even colder AccuWeather.com RealFeel® temperatures that will add to the shock value.

Along with the push of drastically colder air, snow will spread from west to east from Minnesota and Iowa tonight to the western Great Lakes region on Thursday.

Chicago is expected to get 3-6 inches of snow with the worst conditions hitting late Thursday and Thursday night. To the north, Green Bay, Wis., will get 6-12 inches of snow in the heart of the storm.

Chief Meteorologist Elliot Abrams emphasizes in his blog that the changes will start out slowly on in Chicago on Thursday, perhaps fooling some into thinking that nothing drastic will happen.

Later in the afternoon and evening, just in time for the evening commute, it will get colder and windier with snow falling heavily around Chicago.

"This will not have the paralyzing effect Groundhog Day blizzard last year in Chicago, but travel will still become very hazardous," according to AccuWeather.com Expert Senior Meteorologist Alex Sosnowski. The big concern will be with a rapid freeze and plummeting temperatures. Snow falling heavily on Thursday evening will start to coat and disguise a thin layer of ice forming underneath it.

Winds gusting over 30 mph will cause blowing snow, which will be "streaming almost horizontally." Snow will also be drifting. This will result in near-blizzard conditions across portions of Wisconsin and northern Illinois with visibility dropping below a quarter of a mile at times.

Motorists who travel along I-80 will run into extremely hazardous travel conditions on Thursday evening with a combination of very slippery roadway conditions and very poor visibility. Travel will become very dangerous along I-90 and I-94 as well.

Airline passengers should anticipate delays at the Chicago O’Hare International Airport and other busy Midwestern airports.

Accumulating snow will even reach southward to St. Louis, Mo., where a coating to an inch of snow along with the dropping temperatures could make travel very hazardous.

The worst of the snow and wind will spread eastward across the Lower Peninsula of Michigan by late Thursday night and Friday morning. This means there will be a messy commute for Detroit on Friday morning. However, snowfall totals will be lower, 1-3 inches in Detroit.

Cold winds will continue to blow across the relatively mild Great Lakes through the end of the week, allowing for lake-effect snow bands to set up over the typical snowbelts downwind of the lakes.

"Two weeks of winter will be rolled up into two days," added Sosnowski to sum up the winter comeback across the Midwest and portions of the Northeast late this week.