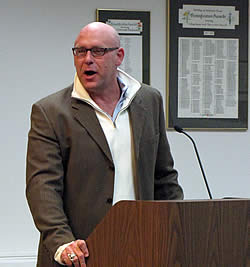 Park Forest, IL–(ENEWSPF)– Is Park Forest ready to play temporary host to 6,000+ zombies? Kenny Yochelson, new owner of the Holiday Star Theater — formerly Eagle Theater, 340 Main St. — has plans to set a Guinness World Record this August when he hosts the Holiday Star Zombie Fest in the Downtown. A man with no small plans, Yochelson says he already has lined up Paul “Pee Wee Herman” Ruebens for the August fest, with plans for more.

“I’ve taken over ownership of the Eagle Theater which is now called the Holiday Star Theater,” Yochelson recently told the Village Board. “It’s going back to the original name.”

Yochelson says the theater will have outdoor screens that will be available to the Recreation and Parks Department.

“We will still be running our second run programs and the like, but we’ll be adding to them every week,” he said.

Among the new features will be midnight shows for the younger adult crowd.

“If they leave the movie theater, we’ll contact their parents as well,” Yochelson said.

“We’ve had some great things going on in the last couple of weeks,” he said. “I know through the years there’s been some complaints about plumbing, heat, sound, cleanliness – well those have all been addressed. The theater’s been cleaned from top to bottom, steam cleaned, fixed, re-plumbed. The projectors have been completely reworked. We’ve added video projection, and Dolby Digital sound will be here in the next six to eight weeks,” he said.

“The theater is actually new in an old building,” he said. “I love old theaters, and that’s why I took it. Our real plans for the Holiday Star is that it become more of a community center, a gathering place.”

The theater has a number of special events planned in the near future, including the Zombie Fest and monthly give-aways. “There’s some exciting stuff that’s going to be happening. The energy’s a lot different at the theater,” Yochelson said.