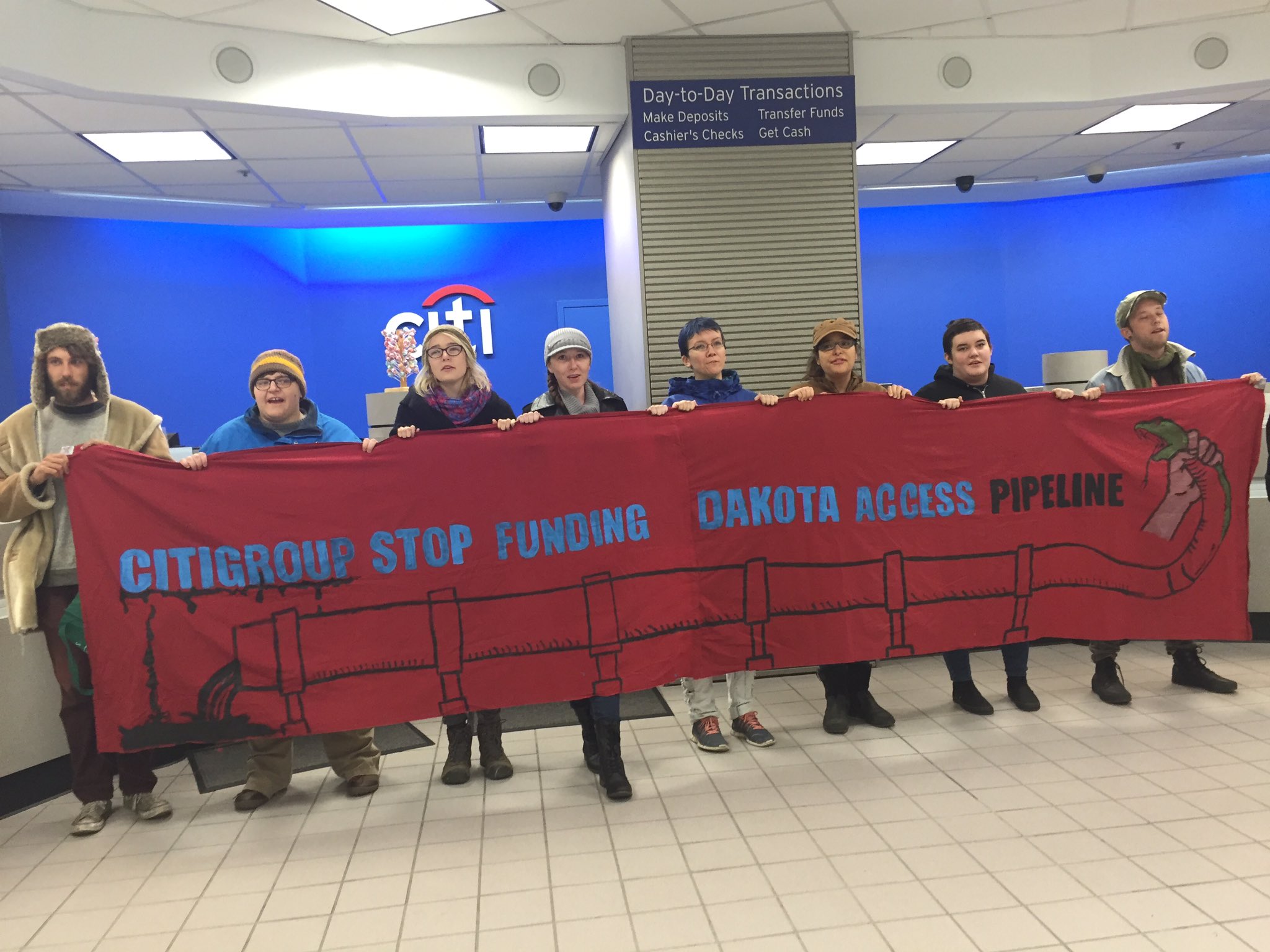 Arrests likely as organizers demand Citibank stop funding the pipeline, part of which is being built on Standing Rock Sioux land.

Over the last three months, thousands of Native Americans and allies have convened in Cannonball, ND to support the Standing Rock Sioux tribe as they resist the construction of the pipeline.

Now at Citibank, organizers have delivered a letter and are chanting while holding banners and signs inside the branch, interrupting business. Supporters outside the branch are handing out fliers to passersby that explain how Citibank is profiting from the Dakota Access Pipeline and that the bank is putting profits before human life and the right to clean drinking water by bankrolling the construction costs.

The Dakota Access pipeline will cross multiple water sources, such as the Missouri and Mississippi Rivers, transporting as many as 570,000 barrels of crude oil daily. 17 million Americans including 28 tribes depend on the Missouri River. This pipeline threatens drinking water and will contribute to global climate change.

“Citibank’s funding of the pipeline directly contributes to the desecration of the sacred sites of the Standing Rock Sioux tribe,” said Rising Tide member Sean Estelle, who is risking arrest in order to shut down Citibank business.

Energy Transfer Partners has justified the need to take land for the pipeline via eminent domain by saying that it would improve national energy security, but the network of pipelines will allow oil that has been obtained from a controversial practice that may cause earthquakes, hydraulic fracturing or “fracking.” The pipeline would allow this oil to be exported all over the world from the Bakken Oil patch in North Dakota. Organizers of today’s demonstration are calling on Citibank to stop funding the Dakota Access Pipeline because it will contribute greatly to the human misery and suffering caused by global climate change.  Over 40 acts of civil disobedience in support of the NODAPL land protectors have taken place around the country.

“It is unacceptable for Citibank to fund the destruction of indigenous sacred burial sites, the pollution of water, and a project that further fuels global climate change” said Angie Viands, with the environmental justice group Rising Tide, who is also risking arrest today. “We won’t let them fund human misery and racism — we’re fighting back.”

For more information on resistance to the Dakota Access pipeline, see: www.nodaplsolidarity.org.