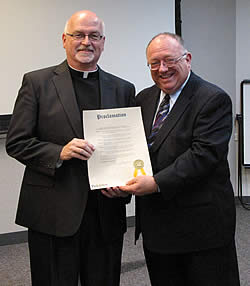 According to a memo prepared for the board by Village Manager Tom Mick, National Transportation Secretary Ray LaHood recently presented on the topic of decreased driver safety in the era of cell phones. It has become very common for cell phone use to take place while individuals are driving their vehicle. With the advent of texting on cell phones, the attention span for drivers continues to dwindle.

Secretary LaHood provided a statistic noting that there were more than 8,000 traffic fatalities in 2008 as a direct result of drivers who were trying to text on a cell phone.

According to the Village Manager, the ordinance has been drafted in the hope that enforcement is the answer to keeping the roads of Park Forest as safe as possible.

A summary of the ordinance follows:

Mayor John Ostenburg addressed those who might characterize passage of this ordinance as evidence that government has become too intrusive, beginning his comments by quoting Justice Oliver Wendell Holmes, “My right to swing my arm ends at the tip of the next guy’s nose."

" When someone is driving and using a cell phone, or texting, they are in fact swinging their arm to the point of hitting other people’s noses," the mayor said, "Because who generally are injured in those kinds of situations is the poor pedestrian who is trying to cross the street and thinks that he has the ‘Walk’ sign, and all of a sudden a vehicle comes speeding through because an individual’s on the cell phone and doesn’t realize there’s a light that says ‘Stop.’”

Ostenburg said Illinois law already forbids use of cell phones while driving in school zones and construction zones, and anticipates that legislators will eventually pass a law similar to Park Forest’s, as they did with no-smoking laws.

“All you have to do is hear one horror story of somebody who has been injured by this, and I think you begin to realize that this is not a matter of personal freedom. This is not intruding on the personal freedom of any individual. Any individual has all the freedom in the world to use a cell phone. They can text until the cows come home.  They can text the cows if they want to. I don’t care who they text.  They just shouldn’t do it when they’re behind the wheel of a vehicle and that vehicle is moving, because that endangers the life other people.

“It’s not their life.  They have that freedom to run into the tree if they want to. I don’t advocate it, but that’s their freedom. The reality is this ordinance is intended to protect the innocent people who are injured as a result of this,” Ostenburg said.

“The other day I saw a situation again: an individual going right through a Stop sign – right smack through the Stop sign – because he was on his cell phone gabbing away, totally oblivious of what the circumstances were. So, I don’t see this as an intrusion on anyone’s personal freedom.”

The mayor then called for a vote, and the ordinance passed unanimously, 7-0, with all board members being present.

Police Chief Thomas Fleming said he anticipates a 60-day promulgation and education period for the general public before directing officers to begin strict enforcement. Violation of the ordinance will result in a ticket, and will not be held against a motorist’s driving record.

The writer is a member of the Village Board.