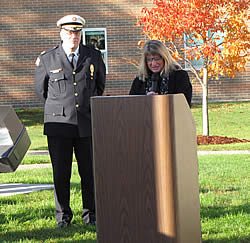 Park Forest, IL–(ENEWSPF)– More than 100 persons gathered on the morning of Saturday, October 10, to participate in the dedication of the new Park Forest Fire and Police Memorial.

The memorial is located at the east of the Park Forest Fire Station, adjacent to the large flagpole. It was constructed from flagstone that formerly was part of the lower entranceway to the old Marshall Field Building. Members of the fire department staff were instrumental in the construction.

Also at the memorial site is a walkway with paver bricks inscribed with the names of deceased Park Forest firefighters and police officers.

On the west side of the memorial is a special tribute to Captain Adolph "Shorty" Pfeifer, the only Park Forest firefighter ever to lose his life in the line of duty. Captain Pfeifer was killed in 1963 while responding to a fire call at the old Sears building, which was under construction in the then Park Forest Plaza. Captain Pfeifer’s daughter, Marsha, traveled from California to Park Forest with other members of the family to be on hand for the dedication and to offer remarks. 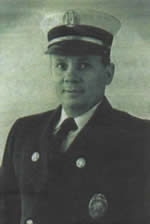 On Friday, February 8, 1963 at 1832 hours the fire department was dispatched to a reported structure fire at 2 Plaza (Sears building under construction).

Upon arrival, Engine Company 1 was confronted with heavy smoke and poor visibility inside the building. Shortly after making entry, Engine 1’s crew discovered the fire was emanating from the elevator shaft. Captain Pfeifer, off-duty at the time of the initial alarm, responded with Engine Company 2 to assist in firefighting operations.

As Engine Company 2 made their way through the building to the location of the fire, the limited visibility conditions prevented Captain Pfeifer from seeing the open elevator shaft and he fell 21 feet down the open shaft. Although crews worked swiftly to rescue Captain Pfeifer from the shaft, his injuries were severe and he was pronounced dead upon arrival at St. James Hospital.

Captain Pfeifer, the Fire Department’s first full-time career member, is survived by his wife, Rose, a daughter, Marsha, and a son, Rodney.

The following is from remarks given by Fire Captain Michael Wheeler:

We meet here this morning to honor those firefighters and police officers that whose names are memorialized on the bricks before us. It is fitting that we do this and it is fitting that their names are engraved on bricks for bricks form the foundation of many buildings and monuments. Like bricks these men and women have built the Park Forest Fire and Police Departments.

Much has been written about the storied history of the Village of Park Forest. The realization of the dream to create a community for the “Greatest Generation” on their return from the battle fields of Europe and the South Pacific. The names Nathan Manilow, Carroll Sweet and Philip Klutznick are forever linked to this history. But what of the veterans that settled in Park Forest? Veterans of WWII, Korea and Vietnam who, after serving their nation, settled in Park Forest and continued to serve in Park Forest as fire fighters and police officers.

In 1949, a small group of volunteer firefighters protected the Village from a barn. Their fire truck was a modified WWII army jeep. They had a dream also. I am honored to have known many of these men as I began my firefighting experience 36 years ago. Firemen like Jack Morrissey, Jimmy Kendrick, Wally Richsteig and Don Murdoch. Policemen like Fred Romano, Jack Mielke, Harvey Parks and Wally Green.

Today, we are the realization of their commitment and dreams.

The Park Forest Environment Commission planted a tree near the memorial at the conclusion of the ceremony. 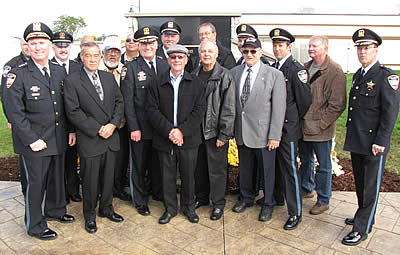 Past and present members of the Park Forest Police Department Saturday at the Memorial Dedication. (Photo: ENEWSPF)