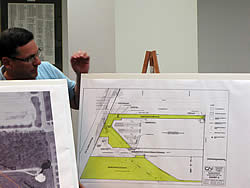 Story updated September 14, 2009 at 10:53 p.m. to reflect approval of the agreement by the Park Forest Village Board

Park Forest, IL–(ENEWSPF)– The Village Board on Monday approved an agreement worth more than $7.35 million it has reached with Canadian National Railway. The agreement caps off many, many negotiations on the part of Village Manager Tom Mick and staff members, as well as consultations in Executive Session with the Village Board when permitted by statute. The board discussed the agreement in detail publicly at last Monday’s regular meeting.

Among other things, agreement calls for over $2.4 million from CN for traffic congestion mitigation; $1.5 million toward residential noise mitigation issues; $100,000 to fund the purchase of vehicles/equipment “at the sole discretion of the Village,” according to the agreement, which will be used to enhance emergency response operations along the rail track; and $100,000 to the Village to fund economic development projects.

Canadian National is also throwing in a caboose that will become part of a new public park in Park Forest related to the heritage of the rail industry and likely to be of particular interest to train enthusiasts.

On January 31, 2009, Canadian National rail company (CN) was granted authority by the federal Surface Transportation Board (STB) to move forward with its acquisition of the former EJ&E rail company and its rail track system. With the STB’s determination in January of this year, communities along the rail arc began to approve Voluntary Mitigation Agreements (VMA) with CN in accordance with guidelines set forth by the federal board.

As a result of a package deal negotiated and proposed to be agreed upon by the Village and CN, the rail company is willing to make substantial improvements to the Village-owned commuter parking lot located at Homan Avenue and Hickory Street. Highlights of the Parking Lot Reconstruction Agreement include:

The rail company will also purchase 5.778 acres of Village-owned property that are legally situated within the corporate limits of the Village of Matteson. Highlights of the Real Estate and Easement Agreement and the Option Agreement as include:

Subsequent to the land sale and deeding back of the wood acreage, the Village envisions a public park being established related to the heritage of the rail industry and of particular interest to train enthusiasts. The 2 acres would be cleared of vegetation except for desirable salvaged trees (hardwoods such as oaks, hickories, etc.), any necessary noise buffering at the edges of the property and any wetlands-designated foliage which may be needed. On the cleared site, a train viewing platform would be installed for train enthusiasts to climb and view trains making the transition from east/west bound rail lines to north/south bound lines. In close proximity a rail caboose would be mounted on a concrete pad with interpretive signage perhaps to be placed noting historical points of interest pertaining to rail traffic in the region. The point of interest would also include a rail-related mural to be constructed on a large retaining wall of the switch rail bridge.

The rail company will also to accept transfer of ownership of the rail track bridge/overpass of Orchard Drive. Highlights of the agreement include:

The total package, worth $7,355,000, is contained in five separate agenda items on schedule for action Monday night.

The writer is a Park Forest Village Trustee. Source material for this article comes from the agenda for the September 14, 2009 Regular Meeting.